Isolated Anterior Dislocation of the Radial Head with Atypical Presentation in an Adult: A Case Report*

Isolated anterior dislocation of the radial head is rarely reported. To date, only five cases have been reported in the world literature. In all of these cases, the patients presented with restricted supination-pronation movements of the forearm with maintained elbow flexion-extension. We report an unusual case of isolated anterior radial head dislocation in an 18-year-old male, who presented with maintained supination-pronation movements of the forearm but restricted elbow flexion-extension. Closed reduction was attempted, but it failed. Hence, an open reduction was performed. However, the reduction was unstable due to rupture of the annular ligament. Hence, the repair of the annular ligament was performed, and a radio-ulnar Kirschner wire was passed to maintain the reduction of the proximal radio-ulnar joint, thus keeping the annular ligament stress-free, facilitating its healing. At 12 months of follow-up, the patient had normal elbow function and complete range of motion. 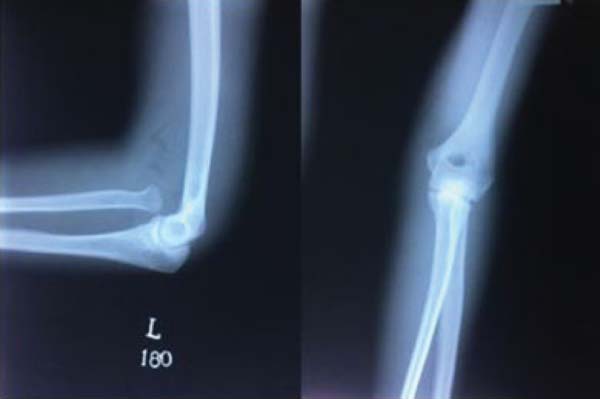 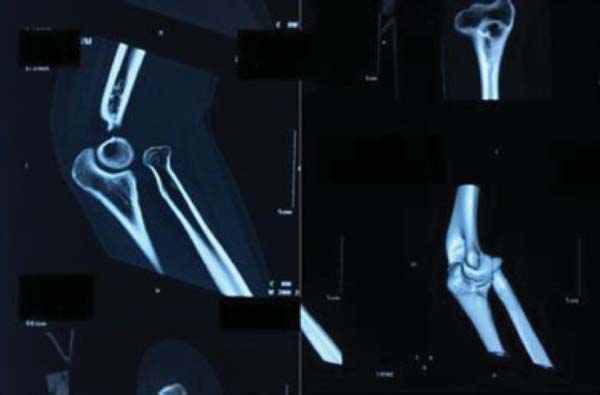 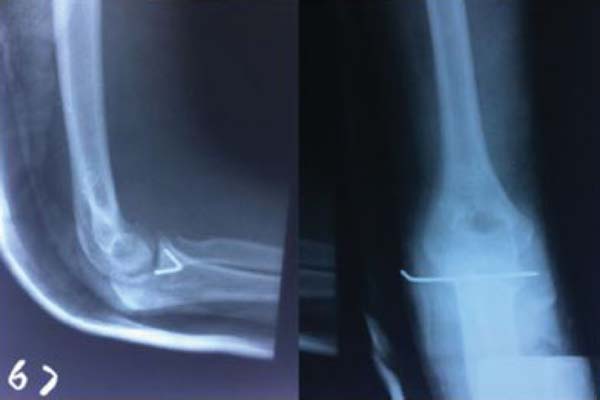 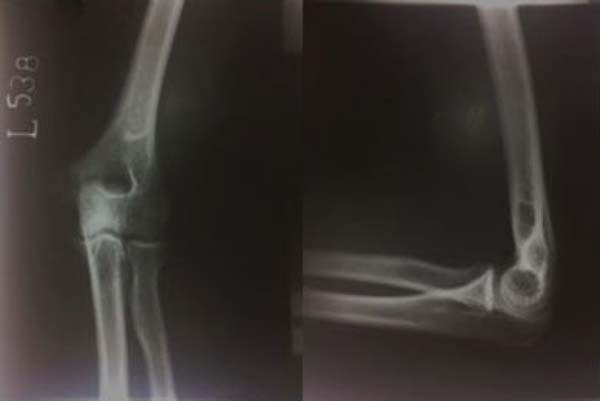 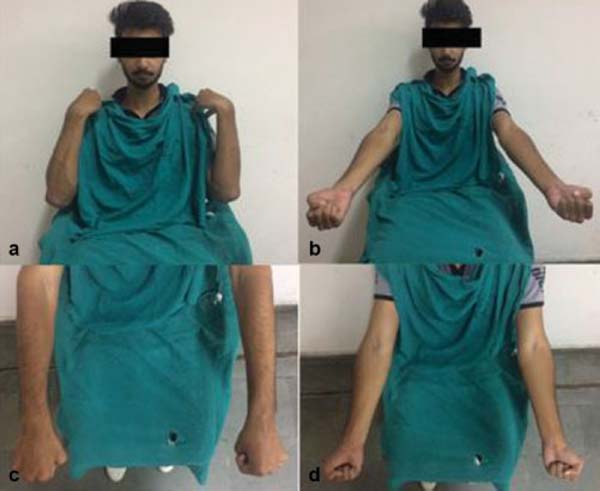 An 18-year-old male college student, who sustained an injury to his left elbow during a wrestling match at a sports academy. He fell down backwards on an outstretched hand with the wrist in dorsiflexion. He complained of pain and swelling on the anterior aspect of the left elbow, and was immediately sent to the Emergency Room (ER) of our hospital. The elbow was held in flexion and partial pronation. Tenderness was present on the anterolateral aspect of the left elbow and the radial head was palpable anteriorly. There was no swelling or tenderness over the ulna or the forearm or the distal radio-ulnar joint. The patient had restricted flexion-extension movements with active range of motion from 30 to 100 degrees, but there was no restriction in the supination and pronation movements of the forearm. The distal neurovascular status of left upper limb was normal. An X-ray was performed, and it showed isolated anterior dislocation of the radial head (Fig. 1). Closed reduction was attempted in the ER using supination and pronation maneuvers, but it failed. A computed tomography (CT) scan of the elbow was performed to rule out any small bone fragments causing difficulty in reduction (Fig. 2). He was given an arm pouch sling, an ice pack and analgesics, and was advised about the need for open reduction. The Boyd approach was used for exposure of the radial head. A plane was made between the extensor carpi ulnaris (ECU) and anconeus muscles. Intra-capsular button-holing of the radial head was found intra-operatively, and was released. The radial head was reduced with 90 degrees of flexion at the elbow joint and forearm in complete supination. However, the reduction was unstable due to rupture of the annular ligament. Hence, a repair of the annular ligament was performed. A radio-ulnar Kirschner wire was passed to maintain the reduction of the proximal radio-ulnar joint (Fig. 3), thus keeping the annular ligament stress-free, facilitating its healing. A Plaster-of-Paris (POP) back-slab was placed. The postoperative distal neurovascular status was normal. The wire was removed after 6 weeks (Fig. 4), and elbow mobilization started. The patient underwent a supervised physiotherapy program. At 12 months of follow-up, the range of motion of the patient was: 0-140 degrees of flexion-extension arc, 70 degrees of pronation, and 85 degrees of supination (Fig. 5), which is consistent with the reference values of the American Society for Surgery of the Hand. The patient had no limitations regarding the performance of daily activities, and returned to the pre-injury Tegner level of sports activity.

Download
Fig. 3. Postoperative radiograph showing Kirschner wire passed through the superior radio-ulnar joint to maintain the reduction.
Fig. 4. Anteroposterior and lateral radiographs after the removal of the Kirschner wire at 6 weeks.

Download
Fig. 4. Anteroposterior and lateral radiographs after the removal of the Kirschner wire at 6 weeks.
Fig. 5. At 12 months, range of motion; (a) flexion, (b) extension, (c) supination, (d) pronation.

Isolated anterior dislocation of the radial head is rarely reported in the world literature. The patients usually present with maintained flexion-extension at the elbow joint but restricted supination-pronation movements of the forearm.1 In the present case, there was an atypical presentation with restricted elbow flexion-extension but maintained supination-pronation movements of the forearm.

Various mechanisms have been postulated for isolated dislocation of the radial head, like hyperpronating forces acting on an already pronated forearm while falling backwards with an extended elbow or falling forward on an extended elbow with the forearm in pronation and rolling of the body, causing further hyperpronation.3 In the present case, the likely mechanism of injury would be the former one. Takami et al4 described a direct mechanism of injury, with direct trauma occurring to a semi-flexed elbow causing anterior dislocation of the radial head.

In summary, isolated anterior dislocation of the radial head is a rare injury. The reduction maneuver depends on the position of forearm at the initial presentation. Closed reduction may not be successful in every case. After the reduction, the stability should always be checked. Addressing these injuries should be a priority in order to prevent stiffness of the elbow and recurrent radial head instability. If managed promptly and under a regular and supervised physiotherapy regime, the patient can restore the normal range of motion and elbow function.