Intertrochanteric Fracture of the Femur in an Ankylosed Hip: A Case Report* 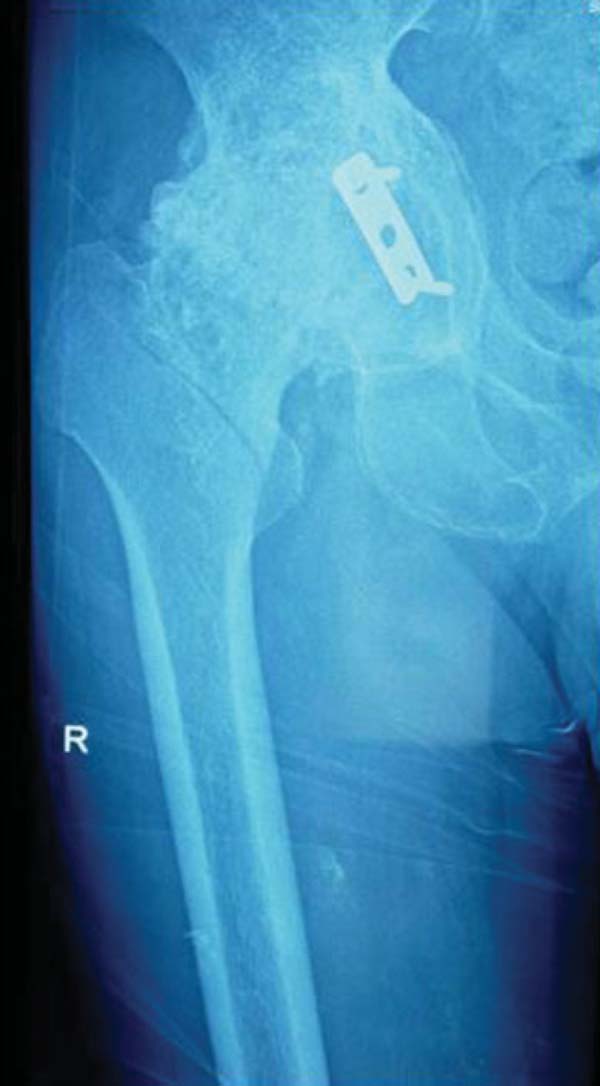 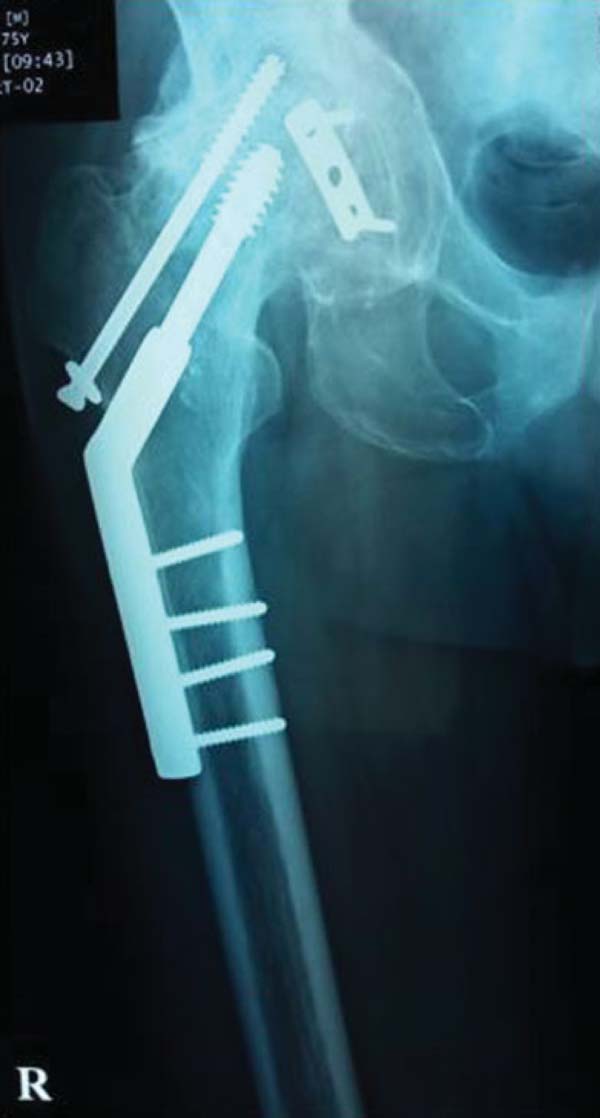 We report a case of intertrochanteric fracture of the femur in an ankylosed hip treated by dynamic hip screws (DHSs).

A 74-year-old man presented to the accident and emergency department with pain on the right hip since one day after a fall. Upon examination, there was tenderness on the right greater trochanteric region and inability to actively raise the right lower limb. Mild swelling was present on the right intertrochanteric region with some ecchymosis. No radiating pain and numbness were present, and the patient was not able to walk or to bear weight due to pain.

He had been operated on the right hip about 20 years before, and had since then been walking with the aid of a walker and limping. The patient was being treated for hypertension and hyperlipidemia. He had also been submitted to treatment for a colon cancer a few years back.

The muscles around the hip region were atrophic. The radiograph of the pelvis showed avascular necrosis with doubtful infective features on the femoral head, with the presence of an ankylosed hip. A small plate was observed in situ on the acetabular region with a non-displaced fracture of the intertrochanteric region of the femur (Fig. 1).

Fig. 1. Non-displaced fracture of the intertrochanteric region of the femur in an ankylosed hip.

Download
Fig. 1. Non-displaced fracture of the intertrochanteric region of the femur in an ankylosed hip.

The fracture was treated with dynamic hip screws (DHSs) and one cannulated screw fixing the acetabulum. Thee patient was discharged home on the 21st post-operative day, and he was advised not to bear weight for six weeks postoperatively. Partial weight-bearing was allowed after the seventh week, and the patient started to walk bearing his full weight three months after the surgery. The patient was on regular follow-up, and 18 months after the operation, the fracture had united, and he was satisfied with the outcome (Fig. 2).

Fig. 2. After one and a half year of the operation: the fracture is united, and the implants are in situ.

Download
Fig. 2. After one and a half year of the operation: the fracture is united, and the implants are in situ.

Intertrochanteric fractures of the femur in ankylosed hips are extremely rare, and there are only a few cases reported in the literature. The non-operative management is associated with many complications related to prolonged immobilization, and surgery is the best option if the patient is physiologically fine.

The fracture was unstable because of the fusion of the hip joint proximal to the fracture site and the presence of the long distal lever arm of the lower extremity.2 The case was not easy, and there are several options of fixation. We used DHSs and one cannulated screw piercing the acetabulum so that adequate stability would be obtained. We thought that DHSs alone were not enough, as the fusion of the hip and the distal lever arm of the lower extremity put strain on the fracture site, which could lead to implant failure.

Total hip arthroplasty (THA) is commonly used for fused hip joints, but it is technically demanding because of the lack of surgical landmarks.4 But, in this case, considering the poor muscle conditions around the hip, thigh and recent history of treatment for colon cancer, we chose the DHSs. There are reported cases of the application of intramedullary nails2,3 and cannulated screws only with good outcomes.5 In this case, the intramedullary nail option was not considered due to the poor muscle status around the hip and the non-displaced nature of the intertrochanteric fracture. Although the weight bearing walk was started later than the aforementioned intramedullary cases, the healing of the fracture and the rest of the rehabilitation of this patient went uneventful. We think DHSs are also an option for intertrochanteric fractures in ankylosed hips.