OBJECTIVE The present work aimed to evaluate the systemic effect of H. speciosa latex on bone neoformation.
METHODS For this, the latex was collected and diluted to 3% and 50%. A total of 28 Wistar rats were submitted to surgery to create a 5 mm diameter defect in the parietal bone. This experiment was conducted in 2 different periods: 1 and 2. For each period, the rats were divided into 3 groups: Control Group, Latex3 Group, and Latex50 Group, which received, respectively, daily administrations of 0.5 mL of distilled water, latex to 3% and latex to 50% by gavage, orally. The rats of periods 1 and 2 were euthanized, respectively, 15 and 30 days after the surgery, and the calvaria was collected. The results were analyzed using the ANOVA and Tukey tests; the significance level was 0.05.
RESULTS We show that, in each analyzed period, the experimental groups had the same amount of newly formed bone in the calvaria defect.
CONCLUSION We conclude that daily and oral administrations of H. speciosa latex to 3% and to 50% over a period of 15 and 30 days does not contribute to the increase of the area of the newly formed bone in the calvaria defect. 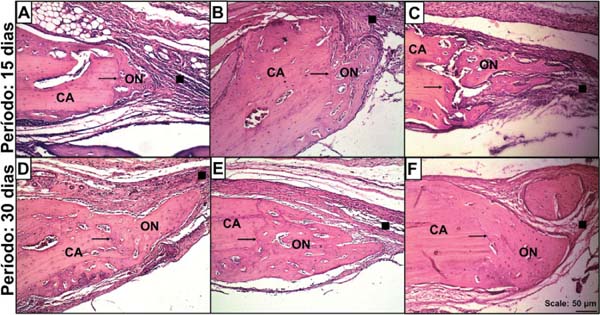 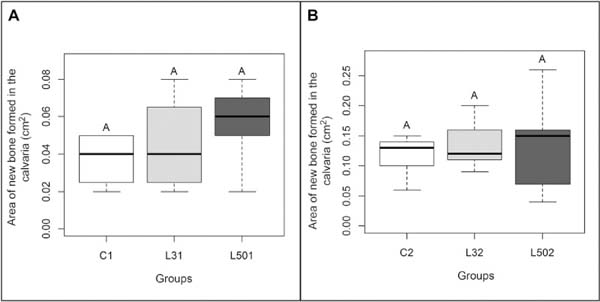 Bone is a highly dynamic mineralized connective tissue. Major bone cells, such as osteoblasts, osteoclasts and osteocytes, are essential for their remodeling.1,2 In the early stages of bone production, osteoblasts deposit the organic matrix, release calcium (Ca)-containing vesicles and induce pyrophosphate degradation, releasing phosphate ions.2-4 Phosphate and Ca form hydroxyapatite crystals and mineralize the bone matrix, forming new bone.1 Through this process of bone remodeling, bone can regenerate spontaneously after the incidence of fractures, injuries or defects.5 However, physiological regeneration is unable to restore bone integrity in extensive bone defects, where the repair process must be supported by some complementary therapies.6,7

Latex obtained from the trunk of the Hevea brasiliensis (a native Brazilian tree known as “Seringueira”) can be an innovative biomaterial for bone repair. Some experiments that have been performed with this product include bone repair of dental cavities in rats,8 guided regeneration of rabbit calvaria,6 osseointegration of dental implants in dogs,9 and bone repair of a critical defect in rat calvaria.10,11

Latex extracted from the trunk of Hancornia speciosa Gomes (another Brazilian native tree known as “Mangabeira”, belonging to the Apocynaceae family) also demonstrated bone repair potential. The research group of the Faculdade de Odontologia de Piracicaba (FOP, in the Portuguese acronym) of the Universidade Estadual de Campinas (UNICAMP, in the Portuguese acronym), demonstrated that topical application of H. speciosa latex on the defects on the skullcap of Wistar rats increased the area of the newly formed bone at the edges of the defect.12

Some communities located in northeastern Brazil produced a milky juice called “leite de mangaba” (mangaba milk) from the trunk latex of H. speciosa. Ethnobotanical surveys have confirmed the use of this milky juice for therapeutic treatment of bone fractures.13 However, to date, no studies have been conducted to confirm this effect.

Hancornia speciosa latex was collected at the city of Mata de São João, Bahia, Brazil (12º27'42'S 37º56'38'O 69NE) in summer. A sample of this was deposited in the Escola Superior de Agricultura Luiz de Queiroz (ESALQ, in the Portuguese acronym) da Universidade de São Paulo (USP, in the Portuguese acronym) and received the number ESA 121.402. After drilling ∼ 10 tree trunks, 250 ml of the dripping latex was collected in a sterile container and mixed with distilled water to obtain a 3% latex solution and a 50% latex solution. The solutions were stored in syringes, protected from light and stored at 4ºC.

Preparation of the Histological Slides

The slides were photographed using the software Optica View 7, and the images were recorded at 100x magnification for the entire calvaria bone defect. These images were analyzed by a single examiner using the software Image J (National Institutes of Health, Bethesda, MD, USA). Calvaria repair processes were demonstrated by descriptive analysis. The newly formed bone area throughout the calvaria bone defect was examined by histomorphometric analysis. For this, a millimeter ruler was first photographed at 100x magnification and then measured from end to end; the distance in pixels was recorded; the known distance was established according to the size of the ruler (1 mm); and the length unit was adjusted in millimeters. This information was recorded on each calvaria defect photo to define scale. Finally, a line was drawn marking all the newly formed bone within the calvaria defect, and then the area of the new bone was calculated. Quantified values were compared between groups.

Data were analyzed using the software R (R Core Team). The Bartlett and Shapiro-Wilk tests were used to verify the deviation of the assumptions. Once the homogeneity of variance and normal distribution were confirmed, the analysis of variance (ANOVA) and Tukey tests were used to compare the period 1 and 2 groups separately. The significance level was set at 5% (p < 0.05).

Conventional histological technique using light microscopy is widely used for bone repair analysis. This technique allows a descriptive analysis of the tissue and the measurement of the area of the components of interest (histomorphometry).15 We used these analyses to evaluate the newly formed bone in the calvaria defect.

The descriptive analysis revealed a similar stage of bone repair between groups C1, L31 and L501 and between groups C2, L32 and L502 (Figure 1). Mineralized trabeculae of the newly formed bone extended from the edges of the basal bone toward the center of the defect.We observed several osteocytes trapped in the bone matrix and medullary spaces filled with blood cells along the trabeculae. Numerous active osteoblasts have been noted around the trabeculae. Abundant connective tissue, widely vascularized, filled the central portions of the defect.

Fig. 1. Bone neoformation in the calvaria defect. Source: From the author himself. Note: These are representative images of one of the edges of the calvaria defect, analyzed over 15- and 30-day periods.Coronal cut. Images A, B and C represent, respectively, groups C1, L31 and L501. Images D, E and F represent, respectively, groups C2, L32, L502. Note the newly formed bone extending from the edges toward the center of the defect in all groups. CA, calvaria; ON, new bone; →, defect. edges; ■, connective tissue itself (Hematoxylin and Eosin, 100X).

Download
Fig. 1. Bone neoformation in the calvaria defect. Source: From the author himself. Note: These are representative images of one of the edges of the calvaria defect, analyzed over 15- and 30-day periods.Coronal cut. Images A, B and C represent, respectively, groups C1, L31 and L501. Images D, E and F represent, respectively, groups C2, L32, L502. Note the newly formed bone extending from the edges toward the center of the defect in all groups. CA, calvaria; ON, new bone; →, defect. edges; ■, connective tissue itself (Hematoxylin and Eosin, 100X).

Histomorphometric Histological Analysis of the Calvaria

In short, bone is a highly dynamic mineralized connective tissue, and its main cells (osteoblasts, osteoclasts and osteocytes) are essential for its remodeling.1,2

The histomorphometric analysis revealed that oral administration of latex at 3% and 50% did not increase the area of newly formed bone in the calvaria defect even after 15 and 30 days of treatment. On the other hand, the literature confirms that there is an increase in the area of the newly formed bone both in the calvaria12 and in the mandible socket8 of rats treated with natural latex using local product applications. This effect can be attributed to the presence of some phytochemicals in the latex. Dos Santos Neves et al12 identified that H. speciosa latex contains chlorogenic acid and naringenin-7-O-glycoside. There is evidence that these compounds stimulate osteoblastic activities.18,19 Active osteoblasts secrete a large amount of alkaline phosphatase and osteocalcin, important molecules for Ca deposition and bone mineralization (Florence et al., 2017). Thus, these phytochemicals can increase bone mineral density and improve bone microarchitecture.18,19 Possibly, our results are different from those found in the literature because of the different routes of product administration. In the present study, we evaluated the effect of the orally-administered product, whereas studies described in the literature demonstrate product results when administered topically. To confirm the effect of oral latex administration on bone neoformation, further doses need to be evaluated in future studies. Also, the chemical composition of newly formed bone also needs to be analyzed to understand the popular belief about the benefit of consuming mangaba milk daily for the treatment of fractures.3

In the present article, we have found that daily and oral administrations of 3% and 50% H. speciosa latex over a 15- and 30-day period did not contribute to the increased area of newly formed bone in the calvaria defect. To confirm other effects of this latex on bone mass, different doses of the product need to be tested and the chemical composition of newly formed bone needs to be evaluated in future studies. In this way, we will be able to understand the popular belief about the benefit of consuming mangaba milk daily for fracture treatment.

The authors would like to acknowledge the National Council for Scientific and Technological Development (CNPq, in the Portuguese acronym), number 141226/2014-5, for the support given to the present study.