OBJECTIVE To evaluate the interobserver agreement of a radiologist, two hip specialist orthopedists with experience in the treatment of pelvic and acetabulum fractures, two general orthopedists, two orthopedics residents and two radiology residents regarding the diagnosis of posterior pelvic ring injuries using plain radiography.
METHOD A cross-sectional study conducted in September 2017. The exams of 20 patients who had been treated for traumatic lesions of the posterior pelvic ring were randomly selected.. A total of nine examiners from different medical fields evaluated the plain pelvic radiographs; those were compared with computed tomography, scans, which are considered a confirmatory diagnostic criterion. Interobserver agreement was assessed using the Kappa test (κ) and 95% confidence intervals (95%CIs).
RESULTS A total of 28 lesions were found by computed tomography (23%; 95%CI: 16-32%) among all of the cases evaluated. The interobserver agreement between plain radiography and computed tomography was moderate among physicians with more experience: a radiologist (κ = 0.461; 95%CI: 0.270-0.652), hip specialists 1 and 2 (κ = 0.534; 95%CI: 0.348-0.721 and κ = 0.431; 95%CI: 0.235-0.627 respectively), and general orthopedists 1 and 2 (κ = 0.497; 95%CI: 0.307-0.686 and κ = 0.449; 95%CI: 0.254-0.645 respectively). Among the orthopedics and radiology residents, the interobserver agreement was considered poor. High false negative values were found among all of the examiners, especially regarding posterior iliac fractures and sacrum fractures.
CONCLUSION Professionals with greater experience in the field have a better ability to identify posterior pelvic ring lesions by plain radiography, but we emphasize that plain pelvic radiography was susceptible to false negative evaluations among all of the professionals assessed. 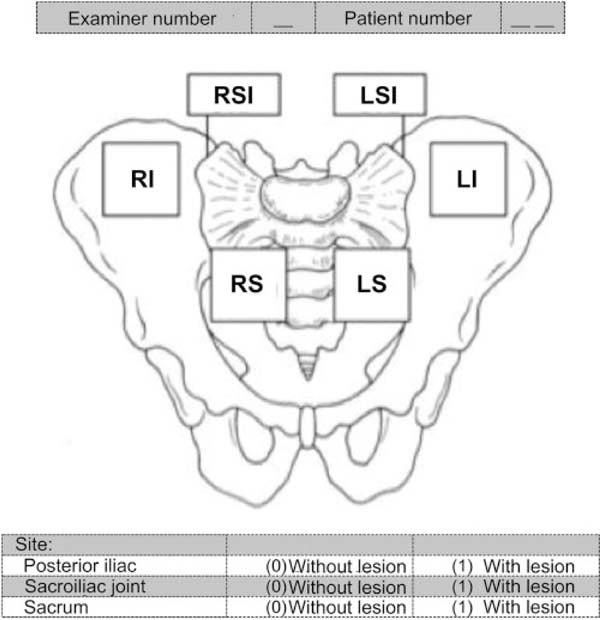 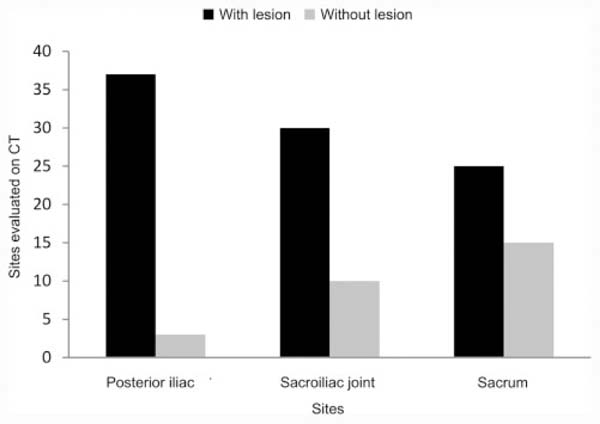 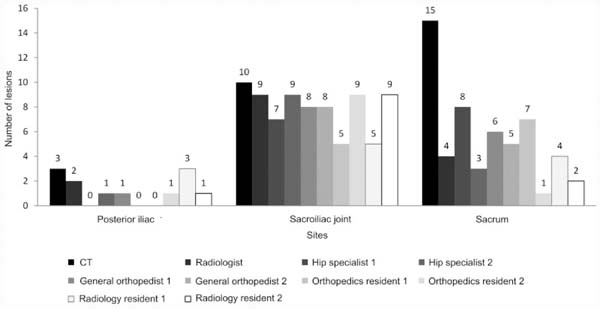 Plain radiographic assessment of the pelvis remains the initial diagnostic pillar for pelvic ring fractures, and it is recommended by the Advanced Trauma Life Support (ATLS), which was developed by the American College of Surgeons (ACS) Committee on Trauma (COT). However, injuries to the structures of the posterior pelvic ring (posterior portion of the iliac bone, sacroiliac joint and sacrum) are difficult to diagnose, and may cause delay and failure in the treatment of these lesions.1

A cross-sectional study conducted in September 2017 at the Orthopedics and Traumatology Service of Hospital Cristo Redentor (HCR) - Grupo Hospitalar Conceição (GHC), in the city of Porto Alegre, Southern Brazil. The research was approved by our institution's Ethics in Research Committee (under CAAE: 72595617.7.0000.5530). Retrospective examinations of 20 patients with traumatic injuries of the posterior pelvic ring previously treated in the emergency unit were randomly selected by lot. Only cases with simultaneous plain radiographic evaluation of the anteroposterior (AP) view of the pelvis and with CT scans were included in the study; the CT scans were used as confirmatory diagnostic criteria.

The images were evaluated as follows: a) a room reserved for slide projections was allocated to the nine examiners; b) a chart with the pelvis design was presented, enabling the examiner to mark the lesion sites in the posterior pelvic ring regions: posterior iliac, sacroiliac joint and sacrum (Figure 1) for each case presented, as well as for the absence of injury, if they so deemed it. In the present study, 120 anatomical sites were evaluated by each examiner; c) the radiographs of the selected cases were presented to the examiners through slide projections, with 30 seconds to consider each case. All of the selected cases presented an identifiable anterior pelvic ring lesion on the radiographs.

Fig. 1. Pelvic drawing sheet for the evaluation of injury sites in the regions of the posterior pelvic ring.

Download
Fig. 1. Pelvic drawing sheet for the evaluation of injury sites in the regions of the posterior pelvic ring.

The data regarding the categorical variables were presented by frequency (%). Interobserver agreement was assessed by the Kappa test (κ) and 95% confidence intervals (95%CIs), and the values assumed for agreement were considered as follows: 0.20: poor; 0.21-0.40: fair; 0.41-0.60: moderate; 0.61-0.80: good; 0.81-1.00: very good.4-6 The CT diagnosis was assumed as a reference evaluation. All analyses were performed using the Statistical Package for the Social Sciences (SPSS, IBM Corp., Armonk, NY, US), version 22.0 for Windows.

Table 1. Interobserver agreement of the diagnoses (by plain radiography) of lesions in the regions of the posterior pelvic ring, compared to the CT scans

Table 1. Interobserver agreement of the diagnoses (by plain radiography) of lesions in the regions of the posterior pelvic ring, compared to the CT scans

Figure 2 shows the 28 lesions according to their respective anatomical sites: 3 posterior iliac fractures, 10 sacroiliac joint injuries and 15 sacral fractures were found on the CT. Figure 3 shows the lesions found at each anatomical site in relation to the respective examiners.

Fig. 2. Sites evaluated on computed tomography (CT) of the regions of the posterior pelvic ring (posterior iliac, sacroiliac joint and sacrum) with or without lesions.

In the present study, we identified that experienced professionals have a greater ability to diagnose posterior pelvic ring lesions by plain radiography. However, plain radiography was susceptible to a high percentage of false negative evaluations among all of the examiners when compared to the CT scans, that is, there was great difficulty in identifying posterior iliac and sacrum fractures.

Posterior pelvic ring injuries are severe and difficult to diagnose,7-10 often requiring urgent stabilization to reestablish the polytraumatized patient from the hemodynamic point of view,11-14 and/or subsequent surgical procedures to fix fractures or dislocations, enabling the patient to return to his or her best functional condition.

Pelvic radiography is indicated as one of the routine exams in high-energy trauma care, but in some situations this exam is insufficient for the diagnosis, classification and procedure definition.15-19 The factors that make pelvic assessment difficult through isolated plain radiography are the lack of patient preparation, with the presence of artifacts such as gas, fecal content, bladder distension, and the complex three-dimensional conformation of the pelvis.20,21 Due to the angle of inclination of the sacrum, visualization is limited in the pelvis AP.1

The CT is often not available in non-specialized centers,8,22-24 and with it the patient is subjected to a higher radiation dose. Publications have shown a high frequency of failure to diagnose pelvic lesions on radiographs, especially lesions involving the sacroiliac joint and the sacrum.25,26 The identification of up to 30% of sacrum fractures is late, which has a negative effect on long-term outcomes.3,27,28 Montana et al29 found diagnosis failure in 28% of sacroiliac joint dislocations, and in 57% of iliac and sacral fractures adjacent to the sacroiliac joint, with the isolated use of plain radiography.

The present study has some limitations: a) the inferior quality of some of the selected radiographs, a usual occurrence in the emergency care context; and b) the definition of the number of selected cases, as well as of the examiners, was performed through a convenience sample.

Professionals with greater experience in the field have a better ability to identify posterior pelvic ring lesions by plain radiography; however, we emphasize that simple pelvic radiography was susceptible to false negative diagnoses among all of the professionals assessed, especially regarding fractures of the posterior region of the iliac and sacrum.

We would like to thank the Hip Group (HCR/GHC) for their support and collaboration.