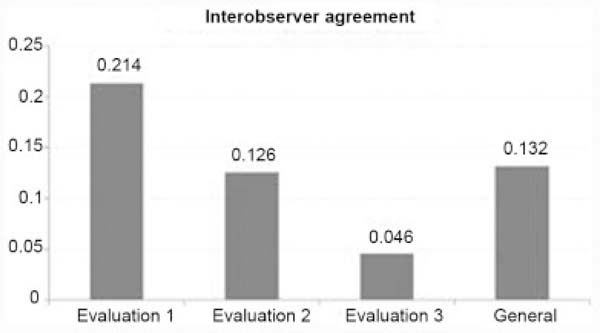 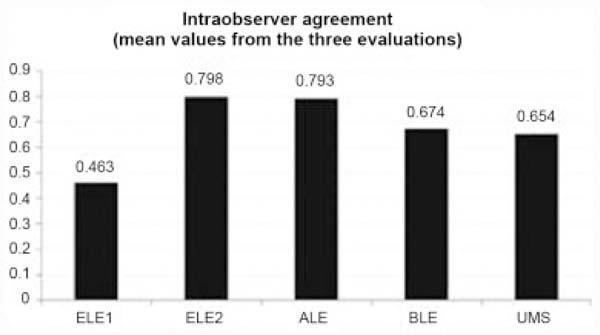 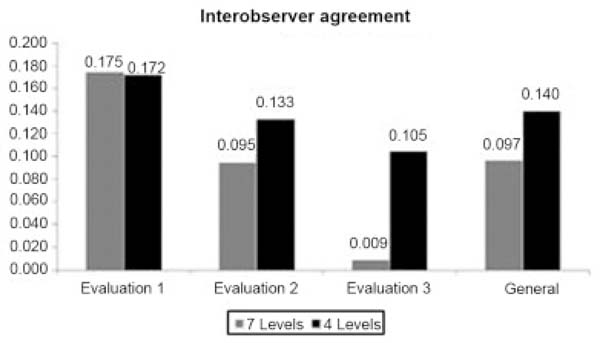 Osteoarthritis (OA) is defined as joint degeneration of primary and secondary origin. Such a limitation causes difficulty to perform daily activities, and can become disabling.

Shoulder arthrosis can affect up to 20% of the elderly population.1 The primary form is insidious, with no previous shoulder disorders, and it usually affects other joints. In the secondary form, however, there is a previous history.1

The initial treatment for OA is based on clinical and drug management. The surgical treatment is frequently indicated to patients with impairments to perform their daily activities who did not respond to the medical treatment.

Imaging scans aid in the diagnosis and staging of the disease, as well as in the indication of the treatment. Radiographs are routinely used in three views - the anteroposterior, scapular and axillary views.1 The main objective of computed tomography (CT) scans is to show glenoid anteversion and to provide a detailed view of joint involvement.3

The main purpose of the classifications is to enable the communication among professionals studying a certain disease, in order to standardize diagnoses and treatments in clinical research. Thus, a good classification must be reproducible and have the ability to predict the prognosis of a particular condition.4

There are several classifications for shoulder OA. The most used OA classification system was proposed by Walch et al3 in 1999, which was modified in 2016.4 This system stages and assesses the progression of shoulder OA based on CT scans of the patients' joints. It considers glenoid morphology, its retroversion angle, and its relationship with the humeral head. These data enable the determination of the best type of arthroplasty to be performed to treat the condition.

However, there is little information on reproducibility and agreement, especially regarding the 2016 modification.

The present study aims to evaluate the intra- and interobserver agreement regarding the modified Walch classification for shoulder OA.

The present is a retrospective, cross-sectional, analytical study of the agreement regarding classifications. The research project was approved by the Ethics in Research Committee of Plataforma Brasil (under C.A.A.E n∘ 66863817.3.0000.5505).

Initially, 62 was determined as the required number of scans to obtain Kappa values greater than 0.70, with a significance level of 5% and 80% of power.

The selected images were obtained between 2012 and 2016 at the Shoulder and Elbow Surgery sector, and they were from adults older than 18 years of age with shoulder OA. In order to assure the good quality of the images, they were selected by two orthopedists who did not participate in the disease classification process.

Scans from patients with proximal humeral fractures, glenoid fractures, scapular body fractures, and shoulder joint dislocations were excluded, as were all images showing any synthesis material.

Initially, 62 shoulder scans were analyzed. After applying the exclusion criteria, ten exams were excluded from the study. Thus, 52 scans were evaluated for shoulder OA classification.

The scans were classified by five examiners with different levels of experience.

The images were organized in a closed digital file. The classifications were made by the observers in three moments, with a three-week interval between them. In the first evaluation (T1), the images were visualized in numerical order. In the second (T2) and third (T3) evaluations, three and six weeks later respectively, the image sequence was randomized. For each evaluation, the image sequence was randomized by a person unrelated to the analysis and not directly linked to the study; this sequence was revealed only during the final statistical analysis.

Each examiner classified the images independently. There was no time limit for the evaluation.

The examiners were instructed not to discuss the systems until the end of the classification stage. In addition, they had no access to the patients' history or any clinical data about them.

The statistical analysis was performed by a specialist in medical statistics. The Fleiss Kappa test was used to assess the intra- and interobserver agreement for each scale. The Fleiss Kappa coefficient is considered the most appropriate to analyze situations in which there are multiple examiners involved or in which many different evaluations are performed, and when the evaluated scale has many categories.5

The test was interpreted according to Altman6 as “proportional agreement with chance correction.” Kappa is the agreement coefficient ranging from +1 (perfect agreement) to 0 (agreement equal to chance) to -1 (complete disagreement). There are no definitions as to the accepted levels of agreement, but some studies suggest that results from 0 to 0.2 show very little agreement; from 0.21 to 0.40, small agreement; from 0.41 to 0.60, moderate agreement; and from 0.61 to 0.80, substantial agreement. Values higher than 0.80 are considered virtually perfect agreements.6,7

According to the Walch classification, shoulder OA is divided into four types and their subdivisions:

There was no correct answer, just the observation of intra- and interobserver agreement (the greatest agreement and greatest disagreement).

Figure 1 shows the Kappa index for the intraobserver agreement at three distinct assessments using seven levels (A1, A2, B1, B2, B3, C and D). The best result revealed a moderate agreement (κ = 0.545).

Fig. 2. Interobserver agreement regarding the three evaluations and at general agreement evaluation.

Download
Fig. 2. Interobserver agreement regarding the three evaluations and at general agreement evaluation.

The agreement calculations were made using only the four basic levels of the Walch classification (A, B, C, and D). Images rated as A1 and A2 were grouped as A; images classified as B1, B2 and B3 were grouped as B.

Figure 3 shows the Kappa index for the intraobserver agreement using only the four basic levels. In this scenario, the best result was substantial, a virtually perfect agreement (κ = 0.798).

Figure 4 presents the comparison of the interobserver Kappa indices when the seven levels (A1, A2, B1, B2, B3, C and D) were used, after the grouping regarding the four basic levels. Although the classification system was simplified, the best interobserver agreement remained very small (κ = 0.172).

Fig. 4. Comparison of the interobserver agreement at each of the three evaluations and general agreement evaluation using seven and four levels.

Download
Fig. 4. Comparison of the interobserver agreement at each of the three evaluations and general agreement evaluation using seven and four levels.

The Walch classification was chosen because it is widely used by orthopedists to determine shoulder joint involvement in patients with primary arthrosis. Intra- and interobserver agreement is very important to the evaluation of any orthopedic classification system.

The Kappa index regarding the intraobserver agreement ranged from 0.305 (ELE1) to 0.545 (BLE), showing that there was small to moderate agreement for the same evaluator. The wide variation between the results probably results from the complexity of this classification system. Professional experience did not have the expected effect on intra-observer agreement, since the highest index was obtained by the BLE, and the lowest index was obtained by the ELE1.

Interobserver agreement was very low at the completion of the three evaluations (κ = 0.132). The index decreased between the three evaluation moments. This reduction showed that time and familiarization with the classification system had no relevant effect at the end of the evaluations; in addition, the training performed prior to the first evaluation may have influenced the results.

The use of the four basic levels of assessment resulted in a better intraobserver agreement, with substantial values obtained for most evaluators. This finding highlights the difficulty in evaluating the Walch classification subdivisions, and it shows that a simplification of the classification leads to a better agreement.

Belotti et al9 demonstrated that intra- and interobserver agreement for distal radial classifications was higher if there were fewer variables. This fact is in line with the present study, in which there was an increase in agreement when fewer variables were used.

Our results reveal an important difference compared to those reported by Bercik et al,4 who demonstrated very good interobserver and virtually perfect intraobserver agreement. This difference may be explained by the use of specialized software to determine the version angle of the glenoid and three-dimensional (3D) reconstructions of CT scans in the abovementioned studies, which were not employed by us.

The use of 3D reconstruction images seems to improve the understanding of glenoid morphology. Osteoarthritis can cause bone degeneration in the sagittal, coronal and axial planes, thus presenting itself as a 3D defect that is difficult to see in two-dimensional images.

Scalise et al10 and Budge et al11 used CT with 3D reconstruction. Both showed that there was a better morphological understanding of the glenoid and, thus, a better agreement between the evaluators when 3D images were analyzed.

It is worth noting that the present study was limited to evaluating the opinions of the examiners; it did not have the goal of establishing a correct answer for each scan evaluated. Therefore, the accuracy of each observer was not assessed. This would require analyzing each observer's responses and comparing them with a golden standard method (with high specificity and sensitivity) for diagnosis.