Patellar tumors are rare. Commonly benign, giant-cell tumors and chondroblastomas are the most frequent types of this tumor. Aneurysmal bone cysts are a less common type, corresponding to less than 1% of the cases. The authors present a case of a 23-year-old male patient who presented left patellar pain and swelling for two years. The radiographic images suggested tumoral causes, and the biopsy was negative for neoplasm. The treatment approach was a complete patellectomy, without complications. The imaging follow-up showed no recurrence. 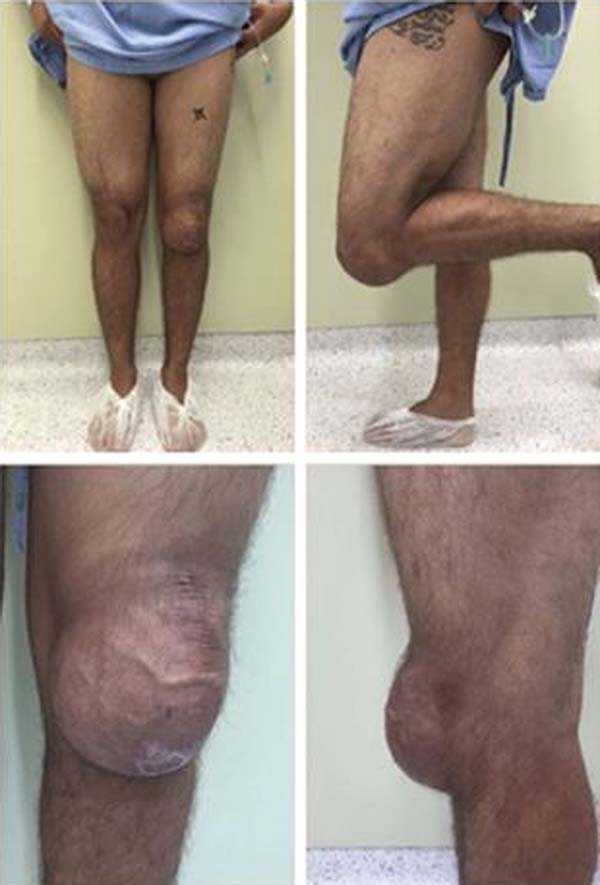 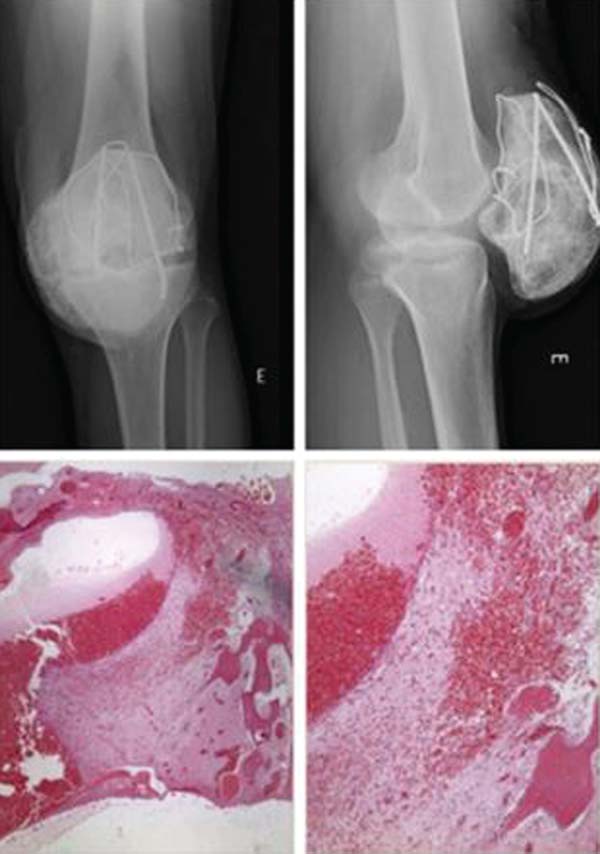 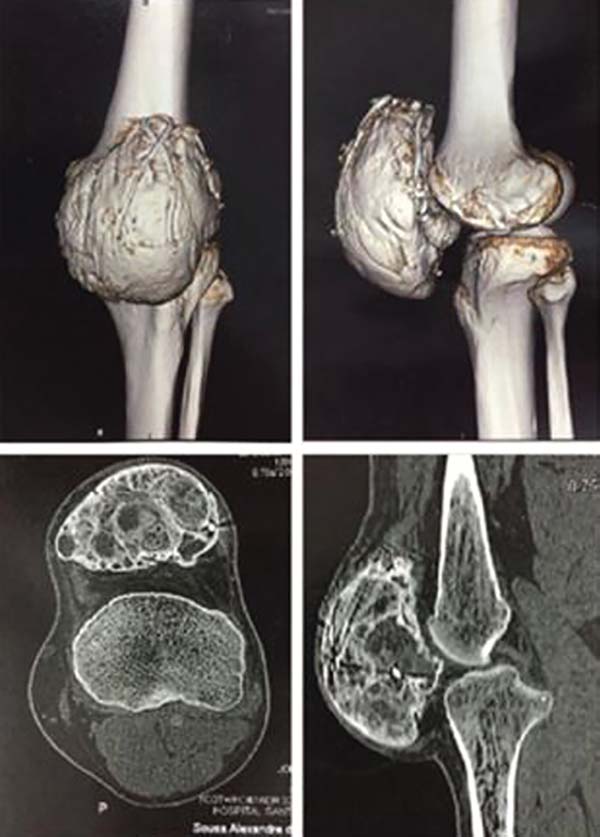 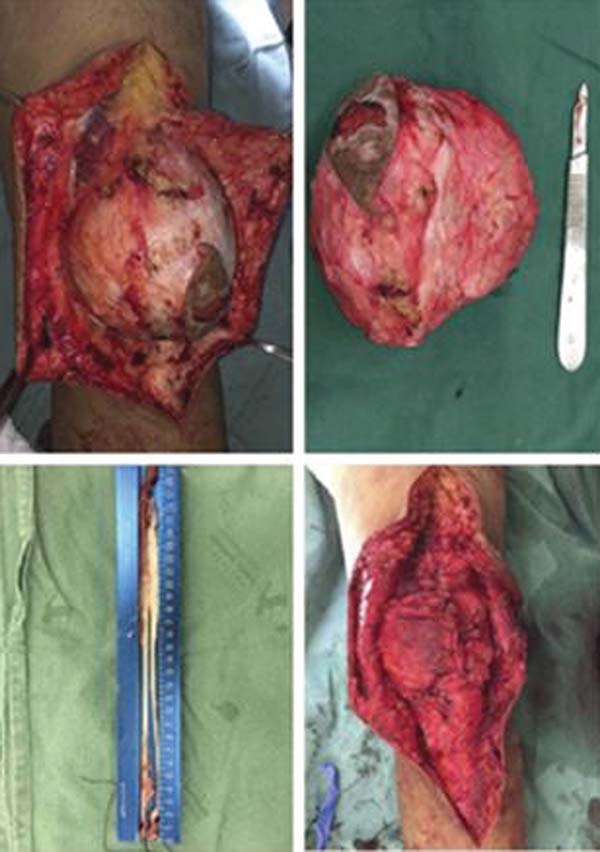 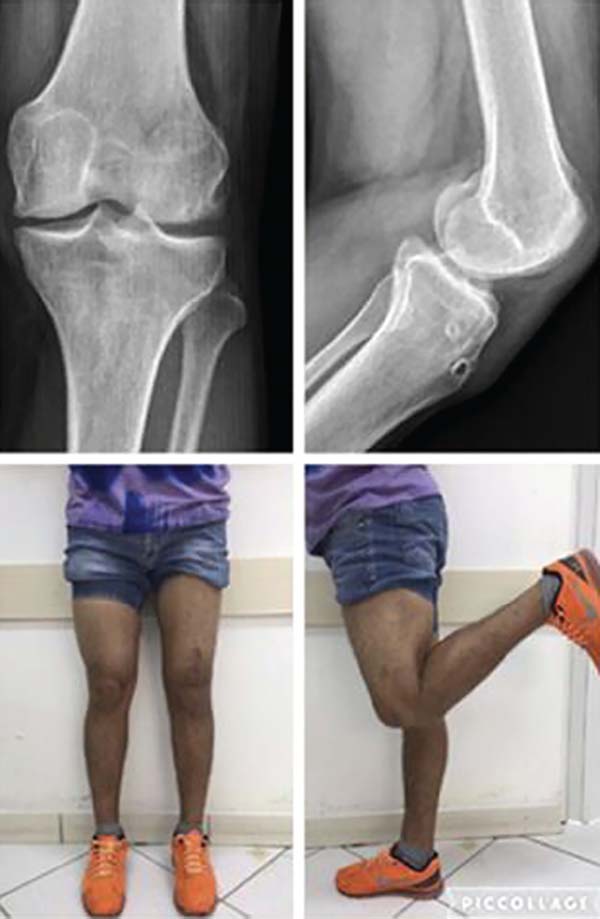 Aneurysmal bone cysts (ABCs) were first described in 1942 by Jaffe and in 1960 by Lichtenstein; later, they also became known as Jaffe-Lichtenstein disease (Mankin et al).1

The ABC is a non-neoplastic expansive bone lesion. It has septate canals and cavities, usually filled with hematic content and trabecular bone tissue. It may be a rare, primary disease, or a condition secondary to a pre-existing lesion.2

The incidence of ABC is of 0.14 cases per 100,000 people in the world; the condition is more common in the first three decades of life. The most frequent sites are the femur, the tibia and the humerus, especially in the proximal metaphyses. The lesions result in cortical thinning, with little bone formation, which are seen radiographically as insufflate areas.3

Less than 1% of ABCs occur in the patella, corresponding to 5% of patellar tumors in the world. Thus, the most common patellar tumors, giant-cell tumors and chondroblastomas, are important differential diagnoses.4,5

The goal of the treatment is to remove the lesion; marginal resection is important to decrease the recurrence rate. If no other coexisting lesion is identified, local curettage can be performed, with lacunar filling using bone graft. In sites like the fibula and the ribs, the bone can simply be removed. Adjuvant treatments include selective embolization, corticosteroid infiltration and calcitonin administration.6,7

The present paper reports a case of a patient with patellar ABC who underwent patellectomy and reconstruction with flexor (semitendinosus and semimembranosus) graft.

A 23-year-old male patient reported progressive enlargement of the left patella, associated with pain and difficulty in knee flexion over the past two years. He also reported that two years before he had undergone surgery to treat a fracture in the same patella (Fig. 1).

Fig. 1. Anteroposterior and lateral images of the leg and knee to demonstrate the patellar tumor.

Download
Fig. 1. Anteroposterior and lateral images of the leg and knee to demonstrate the patellar tumor.

Fig. 3. Computed tomography of the knee reconstruction. Below, axial and sagittal sections of the patella reveal septations and fluid accumulation.

Download
Fig. 3. Computed tomography of the knee reconstruction. Below, axial and sagittal sections of the patella reveal septations and fluid accumulation.

The biopsy results were negative for neoplastic etiologies.

The surgical treatment consisted of broad resection through total patelectomy, and reconstruction of the extensor mechanism with flexor tendons (semitendinosus and gracilis tendons) grafts through a tibial bone tunnel, and patellar tendon stump suture after patellar and quadriceps tendon suture. Next, the fascia and lateral and medial retinacula were imbricated.

The histopathological examination report, performed on May 20, 2016, reads as follows: aneurysmal bone cyst. The lesion was multiloculated, with an irregular contour, and did not exceed the limits of the patellas. The general structure of the synovial tissue was preserved, and there were foci of hemorrhage and hemosiderophages.

The patient was followed-up, and after nine weeks he was fully healed, with no complaints of pain and with active extension and flexion of 0/110º of the operated knee (Figs. 4 and 5).

Download
Fig. 4. Intraoperative image of the tumor. The inferior left image shows the gracilis and semitendinous tendons. The inferior right image shows the final reconstruction.
Fig. 5. Anteroposterior and lateral images of the knee after the treatment, with a bone tunnel for grafting. Below, the patient at the postoperative period.

Download
Fig. 5. Anteroposterior and lateral images of the knee after the treatment, with a bone tunnel for grafting. Below, the patient at the postoperative period.

The condition is more common in females, and occurs mainly in the first three decades of life.8 Our patient belongs to the age group with highest incidence, but not to the most affected gender.

The pathogenesis of ABCs is controversial, but it has been postulated that it may have a primary origin when there is no previous local bone lesion, and it may be secondary when it arises after a local bone injury with partial or total replacement.9 Our patient had a previous local fracture, which suggested that his ABC was secondary to trauma.

The most common symptoms are pain and edema of insidious onset and gradual worsening.10 In this case, soft tissue swelling, pain and functional disability were the most relevant symptoms.

The diagnosis is made through a clinical evaluation aided by simple radiographs and computed tomography scans, as well as histopathological studies.11

The histopathology of ABCs reveals heterogeneous cavities of varying sizes, filled with hematic content, and with a classic arrangement described as having a “honeycomb” appearance.12 Septa are formed by connective tissue, and occasionally contain trabecular bone tissue.13

The radiological studies in cases of ABC show an eccentric or central radiolucent, expansive, distended lesion, usually in the metaphysis or diaphysis of the long bones. According to the classification of Campanacci et al,14 the patellar tumor reported in the present article is of type II.

The computed tomography scan can detail the multiseptated fluid-filled cavities,15 exactly as observed in the case described here.

There are basically two treatments for ABCs: marginal resection through curettage and neoadjuvant agents, such as phenol and liquid nitrogen, electrocautery, or broad resection. In the case of long bones, curettage and phenol use are usually accompanied by bone grafting. If total resection is not disabling, such as in the ribs, the ulna and the patella, this technique may be applied. Radiotherapy is contraindicated because of the risk of sarcomatous degeneration.16

The recurrence rates in cases of ABC range from 0% to 60%; the rate decreases to almost 0% in total resections, and it increases if the curettage does not completely remove the lesion. Campanacci et al14 noted that 26% of the patients treated with curettage had recurrences, which did not happen in patients undergoing total resection.