Hip arthroplasty is a common and safe intervention in orthopedic surgery. However, the proximity of this joint to large vessels makes the occurrence of vascular injury a rare but serious and possibly lethal complication of this surgical technique. Acute vascular injuries in the context of a hip arthroplasty have variable etiologies and clinical presentations, and are more common in revision surgeries and in situations of medial intrapelvic migration and of chronic infection of the hip prosthesis. In the present article, the authors present a case of acute and late major vascular complication in the context of hip arthroplasty revision. The patient developed an acute laceration of the external iliac artery caused by chronic and progressive medial intrapelvic acetabular migration of the hip prosthesis associated with chronic infection. 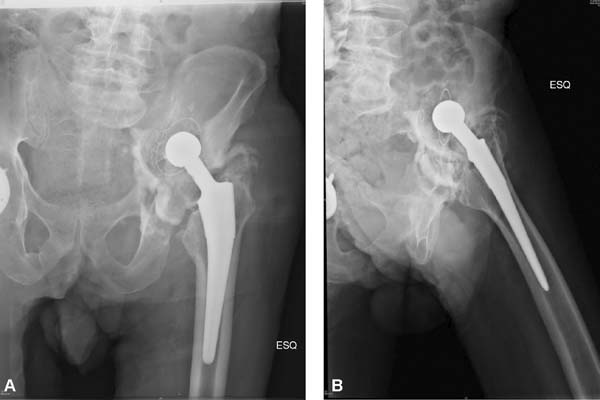 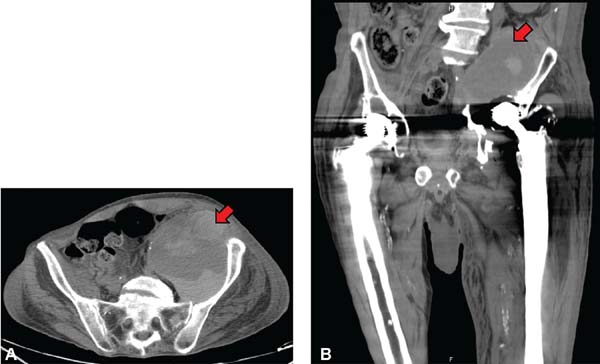 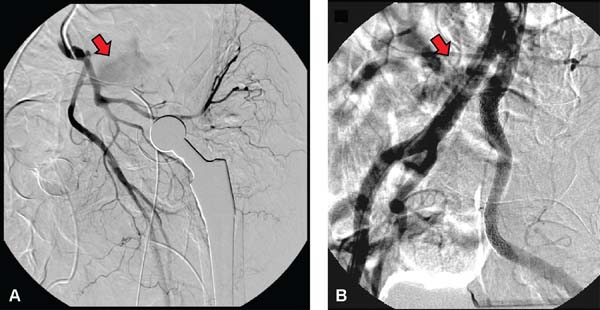 Hip arthroplasty is a frequent and safe procedure in orthopedic surgery. However, the proximity of this joint with large caliber vessels causes it to be associated with some risk of lesions, although minimal (incidence of 0.1 to 0.25%). Although it is a rare complication, its effects can be devastating and can jeopardize the life of the patient.1,2 The vessels most commonly affected are the common femoral, obturators, external iliac, common iliac, superior gluteal and deep femoral arteries and veins.3-5

We present a 75-year-old patient referred to our emergency department due to abundant hematopurulent drainage through an operative scar located in the left hip. The patient was hospitalized at another institution for 4 days due to a clinical picture of fever, prostration and acute anemia, which the value of hemoglobin dropped from 12 to 7.6 g/dl in just 1 week, requiring transfusion support and fluids administration. On admission to our institution, he was hemodynamically stable, prostrate, febrile, with moderate left thigh edema and blood drainage due to surgical scarring in the hip. Neurovascular examination of the limb was normal, presenting palpable femoral and distal pulses, and the temperature was maintained. The patient had undergone cemented total left hip arthroplasty 2 years before at another institution, which was afterwards reviewed with reorientation of the acetabular component, due to instability. After this review, the development of a dehiscence of the surgical wound was verified and the patient was diagnosed with periprosthetic infection with Staphylococcus aureus isolation in purulent drainage by the fistula. Radiographs of the pelvic bone showed detachment of the acetabular component and prominent cephalic and medial migration of the hip prosthesis beyond the Kohler line (Fig. 1). Considering the context and the suspicion of vascular lesion, a computed angiotomography was requested (Fig. 2), which revealed a hematoma that occupied most of the left iliac fossa and of the inguinal region, conditioning deviation and compression of the left iliac axis. Superficial to this hematoma, it was verified that the external iliac artery was patent but laminated, and in proximity to the hip prosthesis, with irregularity at the level of the primitive iliac bifurcation, of a traumatic nature.

The diagnosis of acute laceration of the external iliac artery by erosive migration of the hip prosthesis was acknowledged. An angiogram was then performed, in which there was clearly a contrast extravasation originating in the initial segment of the left external iliac artery (Fig. 3A).The lesion was excluded by placement of two Atrium Advanta V12 balloon expandable stents (Getinge Australia Pty Ltd., Macquarie Park, NSW, Australia) measuring 6 × 59 mm and 5 × 59 mm (Fig. 3B), thus achieving a halt in the hemorrhage and hemodynamic stabilization of the patient with fluid therapy and transfusion of erythrocyte concentrates and blood products.The hemodynamic stabilized patient then continued treatment care for chronic arthroplasty infection, which included targeted antibiotic therapy and surgical treatment with extraction of prosthetic components and surgical cleaning. On account of what happened, of the increased risks and the own will of the patient, we chose to not perform arthroplastic reconstruction.

Fig. 3. Angiography A, extravasation of contrast with origin in the left external iliac artery; Angiography B, angiography after placement of covered stents, with hemorrhage stopped.

Download
Fig. 3. Angiography A, extravasation of contrast with origin in the left external iliac artery; Angiography B, angiography after placement of covered stents, with hemorrhage stopped.

Despite their rarity, the consequences of major vascular lesions in the context of hip arthroplasty are those with the highest potential for lethality, presenting mortality rates of 7% and a limb amputation rate reaching 15%.6,7 In view of this, the orthopedist should take into account that such lesions may occur in any hip arthroplasty and maintain a high level of suspicion in the identification of cases of high risk of major vascular injury, in particular revision and intra-pelvic medial acetabular migration surgeries. The combination of deep chronic infection of the hip prosthesis with intrapelvic medial migration of the acetabular component constitutes a high-risk situation for vascular injury, to the extent that the infection renders the perivascular tissues friable, thus more susceptible to injury.4,5,7,8

All these risk factors for major vascular injury referred to are present in the case described. We should keep in mind that the hip is close to larger arteries, and that the migration of metallic material into the tissues has unpredictable results. As such, a detached and migratory prosthesis has a high risk of injuring these arteries, as it has in this rare case.

The etiology and clinical presentation of acute vascular lesions in the context of a hip arthroplasty are variable, ranging from mechanical compression to thermal injury by cement, from insertion to extraction of retractors and components (especially acetabular) or from hypovolemic shock by sudden high-velocity pulsatile hemorrhage to progressive hypotension, limb ischemia, pain, or pseudoaneurysm.2,4,5,7-9 In this case, progressive chronic medial migration of the hip prosthesis caused an acute erosive laceration by contact of the external iliac artery, conditioned arterial hemorrhage, which would have been buffered and contained by the formation of a large hematoma in the iliac fossa that compressed and deviated the left iliac axis. This hematoma allowed to contain the hemorrhage and was manifested by acute anemia and drainage to the outside through the fistula of the periprosthetic infection. It is therefore a major acute and late vascular complication, a rare form of major arterial lesion in the context of hip prostheses, in which a chronic prosthetic migration caused acute erosive laceration.

Extraction and revision of the migrating hip prosthesis should be performed as early as possible in order to avoid the risk of migration to larger neurovascular structures whose injury may endanger the life of the patient. The extraction of the acetabular component itself is at risk of causing these lesions intraoperatively, so the surgical team must be prepared to deal with this complication. The treatment of large vessel lacerations with covered stents is effective; however, it should be avoided in the context of infection due to the risk of such external material also being infected. However, given the size of the hematoma and the expected excessive friability of the vessel, which would probably prevent its direct repair, we considered that it was the most appropriate option to stop the hemorrhage.10,11

In conclusion, chronic progressive medial migration of the prosthesis can lead to potentially fatal severe acute arterial injuries, whose early diagnosis and swift treatment may save the life of the patient. In the presence of hip prostheses with a high risk of major vascular injury and particularly in the presence of intrapelvic migration, this should be removed as early as possible in order to avoid severe vascular lesions.9