Superficial acral fibromyxoma is a benign and rare tumor of the soft tissues. It usually manifests itself through a painless mass of slow growth that affects mainly males in the fifth decade of life. It usually affects the distal region, with a polypoid or dome-shaped appearance. The histological appearance is of a dermal mass without capsule, with spindle-shaped fibroblasts in a storiform or fasciculated pattern in the myxocollagenous stroma. The immunohistochemical evaluation of superficial acral fibromyxoma is usually positive for CD34 and CD99, with variable positivity for epithelial membrane antigen. The treatment consists of complete excision of the tumor mass.
A review of the current literature on superficial acral fibromyxoma was performed, with an emphasis on the number of cases reported, location, diagnostic methods, histological characteristics, differential diagnoses and treatment.
A total of 314 reported cases of superficial acral fibromyxoma with variable locations were found in the current literature, mainly in the toes (45.8%) and fingers (39.1%). It has a slightly superior incidence in men (61%) and enormous variability in the age range of occurrence.
Superficial acral fibromyxoma is a single soft-tissue tumor that should enter the differential diagnosis of periungual and subungual acral lesions; the treatment consists of simple excision. More studies are needed to better understand this pathology, which was first described in 2001. 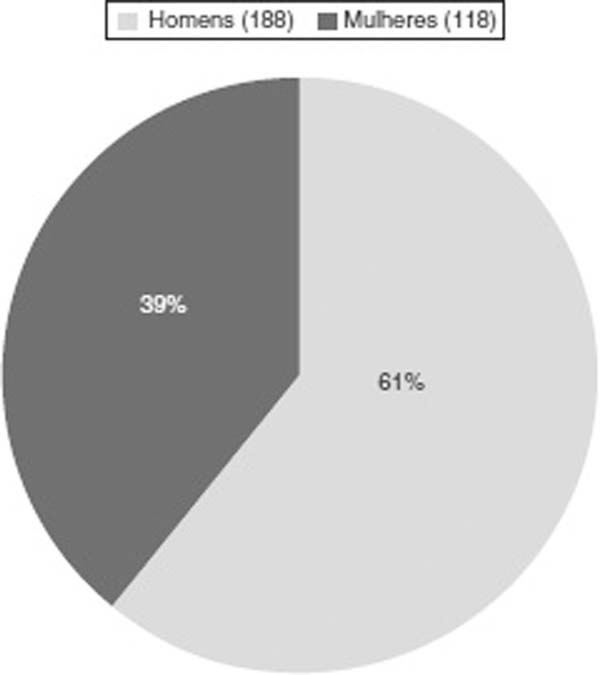 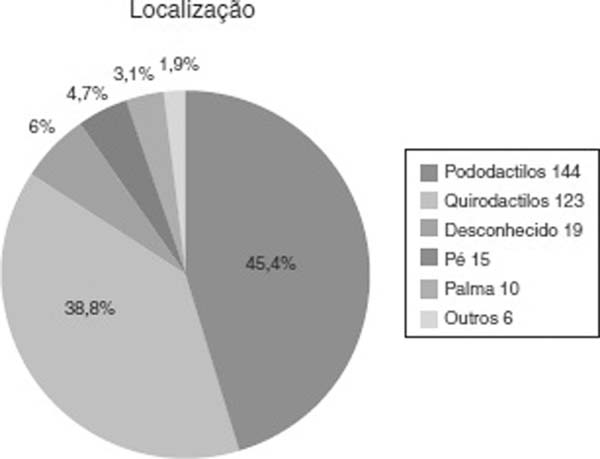 Superficial acral fibromyxoma (SAF) is a myxoid tumor described in 2001 by Fetsch et al,1 which affects preferentially the subungual or periungual regions. It usually manifests itself through a painless mass of slow growth that affects mainly males in the fifth decade of life. It is usually located in the acral region of the hands and feet, but it can affect the region of the heel and ankle.2-7 History of associated trauma is rare, and most tumors grow asymptomatically. Regarding the histological analysis, it presents as a neoplasia of difficult delineation, which is composed of spindle- or star-shaped cells with varying degree of pleomorphism. It presents cells arranged in the myxoid and collagenous stroma, with immunoreactivity for CD34, CD99, vimentin and focally for the epithelial membrane antigen (EMA). Blood vessels predominate in the myxoid area, and mast cells are usually distributed throughout the lesion. The treatment typically consists of complete mass excision in order to avoid relapses or malignization, although the tumor does not present aggressive behavior, despite the presence of cellular atypia in some cases. To date, the occurrence of malignancy has not been reported in the literature. The postoperative follow-up should be performed because of the recurrence rate of 10 to 24%.6-8 The present work aims to review the current literature on SAF, with an emphasis on the number of cases reported, gender distribution, location, lesion characteristics, diagnostic methods, histological characteristics, differential diagnoses and treatment.

The present study, which is a review of the literature on the tumor described by Fetsch et al1 as superficial acral fibromyxoma, is focused on studying the number of cases reported, their location, the main histological characteristics, their differential diagnoses, and the treatment. A bibliographic search was carried out in the PubMed database, in which 58 papers were found through the descriptors: “superficial AND acral AND fibromyxoma.” The inclusion and exclusion criteria are as follows:

The mean age at which the diagnosis was made was 47 years and 7 months, but with a large variance; there were cases in people aged between 4 and 91 years.

Out of the 306 cases in which information on gender was available, we found: 61% of cases in men, while women accounted for only 39% of the cases (Fig. 1).

Regarding location, we found an almost exclusive incidence in the hands and feet, most commonly in the regions of the fingers (chirodactyls) and toes (pododactyls) . However, cases in which the tumor affected the calf and thigh have also been described.8

The main location of the tumor (Fig. 2) was the pododactyls, which were responsible for 45.8% of the cases; the chirodactyls represented 39.1% of the cases. In 19 cases (6%) information on the location was not available (Fig. 2).

Typically, SAF is a slow-growing, solitary, usually painless lesion with a consistency between gelatinous and firm, and size between 0.5 and 5 cm.1-8

In the histological examination, SAF is found as an unencapsulated dermis tumor that can extend itself to the subcutaneous tissue, the underlying fascia or the periosteal layer.1 It is composed of star-or spindle-shaped fibroblast tumor cells in a variable degree of mixed myxoid or collagen matrices. As the tumor persists, the collagen matrix tends to become predominant over the myxoid matrix.1 The neoplasia often shows marked microvascularization and mast cells. In almost every case, mitotic figures are infrequent, and nuclear atypia, if present, is mild to moderate.10

The main differential diagnoses found in the literature are described in Table 2.

The treatment of these tumors typically involves complete excision to prevent malignancy and recurrence, according to 10 studies.1,4,6,8,12,22,26,28,30,35

Superficial acral fibromyxoma (SAF) is a benign, distinctive, soft, slow-growing tumor with a predilection for the periungual and subungual regions of the hands and feet.39

The tumor is an entity that is difficult to diagnose due to the characteristics it has in common with many different pathologies, which causes a delay in the definitive diagnosis, with cases reported in which the interval between the beginning of the symptomatology and the final diagnosis was superior to 10 years.9,10 The late diagnosis is also due to its indolent nature and to the fact that it generally presents low morbidity to the patient. The fact that it is a relatively recently described pathology (2001) that has few cases in the literature helps delay the diagnosis and contributes to the possibility of underdiagnosis.

Regarding the gender of the patients, there is a predominance of approximately 2:1 of males in most of the studies evaluated;40 in the present review, it was of 1.59:1: we found 61% of incidence in males, 39% in females, in a population of 306 cases in which information on gender was available (Fig. 1).

To date, no other risk factors have been reported.39

Regarding location, there is a predominance of the acral regions of the hands and feet, but SAF can be found in other places, such as the legs, thighs and ankles, as reported in three works.7,8,25

Due to the heterogeneity in presentation and clinical and histological characteristics, SAF should always be part of the differential diagnosis when evaluating a lesion in the acral regions of the hands and feet.

The diagnosis is of clinical suspicion and histopathological confirmation, but other diagnostic methods have been described as auxiliary, such as simple radiography, ultrasonography and nuclear magnetic resonance (NMR).8,41,42

Simple radiography of the site has been useful in determining bone involvement (36% of cases in the study by Hollmann et al8 presented erosive or lytic bone lesions).8 Soft-tissue masses usually do not present calcification on single radiographs. However, they are responsible for the erosion of the underlying cortical bone, which may be present. In the diagnostic suspicion, complementation with simple radiographs is imperative, since bone involvement may alter the estimated extent of the lesion as well as the therapeutic planning, as observed by Varikatt et al.18

Ultrasound examination can add important information about tumor mass size, location, shape and mass content. Associated with complementation through the vascular study provided by color Doppler, the vascular pattern can be defined as aiding in the therapeutic decision. The ultrasound also has its use associated to the monitoring and relapses of surgically-treated lesions.41

Histopathologically, SAF is described in most studies as a well-circumscribed, unencapsulated dermal tumor composed of star- or spindle-shaped cells in a loose fascicular arrangement embedded in a myxoid, myxocollagenous, or collagen-only stroma. It usually occupies the entire dermis, and can extend to the subcutaneous tissue or occasionally into the fascia and bones.10

Tumor cells in SAF show immunoreactivity for CD34, EMA and CD99.1 Although the immunoreactivity is diffuse and relatively strong for CD34 and CD99, in the case of EMA it is somewhat more variable. Recently, some tumors have also shown focal reactivity to smooth-muscle actin and desmin, although this is not considered a general characteristic.1,8,43

The differential diagnosis includes a variety of fibromyxoid or myxoid proliferations. Dermatofibrosarcoma protuberans (DFSP) may have extensive myxoid areas that may mimic SAF. This fact, in combination with the expression of CD34 and EMA by both entities, makes it a differential diagnostic challenge.44

Other myxoid sarcomas, such as myxofibrosarcoma, may be distinguished by the presence of greater cytologic atypia, larger numbers of mitotic cells, and atypical mitotic forms.8

Myxoid neurofibroma usually has a neural appearance, without increased vascularization. The tumors are characterized by cells that are positive for S100 mixed with CD34-positive fibroblastic cells, which differs from SAFs, which are S100-negative and have concentrated microvasculature.10,11

Fibroma of the tendon sheath is a solitary, slow-growing, subcutaneous tumor with a predilection for the fingers, hands and wrists of middle-aged adults. It is more common in men. In general, the tumors are grayish-white, well-circumscribed, and attached to a tendon sheath. In contrast to the cell proliferation of star- or spindle-shaped cells like fibroblasts, as observed in SAF, this tumor presents sparse star-shaped cells embedded in a fibrocollagenous matrix with dilated or slit-like vascular channels.45

Giant-cell tumor of the tendon sheath is a slow growing benign tumor with a predilection for the dorsal surface of the finger, near the distal interphalangeal joint in young adults. The tumors are lobulated, grayish-brown, and are usually attached to a tendon sheath. Histologically, they are spindle-shaped and are mixed in a collagen stroma. Multinucleated giant cells are characteristic. Hemosiderin pigment, xanthoma cells and chronic inflammatory cells are also a common finding. Mononuclear cells show immunoreactivity for CD68, but not for EMA, CD34 or smooth-muscle actin.45

Glomus tumor is an extremely painful, solitary, subcutaneous mass that involves the fingers and toes in middle-aged adults. The subungual region may be affected. The tumor cells show immunoreactivity to vimentin and smooth-muscle actin in the cytoplasm.45

In short, SAF should be included in the differential diagnosis of any slow-growing mass or nodule located in the periungual or subungual regions of the fingers and toes, as recommended in the studies evaluated in the present review.4,8,10,11,22,34,35,42

The treatment of these tumors involves surgical excision to prevent malignancy and recurrence. Although the tumor does not show evidence of aggressive behavior, the presence of cytologic atypia in a small number of cases makes the malignant transformation potential unclear.1

No cases of malignancy have been reported in the literature.10

Regular follow-up after excision is justified, as the reported recurrence rate may reach 24%, mainly due to incomplete excision.5-8

Superficial acral fibromyxoma is a single soft-tissue tumor with a predilection for the periungual and subungual acral regions. It presents a clinical picture and histopathological characteristics like other dermatological conditions, which makes its final diagnosis difficult.

The methods described in the literature that support the diagnostic definition are imaging tests, histopathological evaluations, and immunohistochemical studies.

Currently, the treatment for SAF is limited to simple excision, with a significant relapse rate and unknown malignancy.

1
Fetsch JF, Laskin WB, Miettinen M. Superficial acral fibromyxoma: a clinicopathologic and immunohistochemical analysis of 37 cases of a distinctive soft tissue tumor with a predilection for the fingers and toes. Hum Pathol 2001;32(07):704-714