Myxofibrosarcoma is a rare soft tissue sarcoma. The authors present a case report regarding the excision and reconstruction of an extensive low-grade myxofibrosarcoma in the forearm, in the wrist, and in the hand of a young woman. A large-scale monobloc excision was performed according to resonance magnetic imaging (MRI) and transoperative histopathologic study findings. A dermal matrix and total skin graft associated with a postoperative physiotherapy program were used. The aspects related to the differential diagnosis of myxofibrosarcoma in a young patient, its infiltrative character, the extensive excision, the reconstruction in two surgical times (using a dermal matrix and a full-thickness skin graft), and the postoperative physical therapy program were considered important. 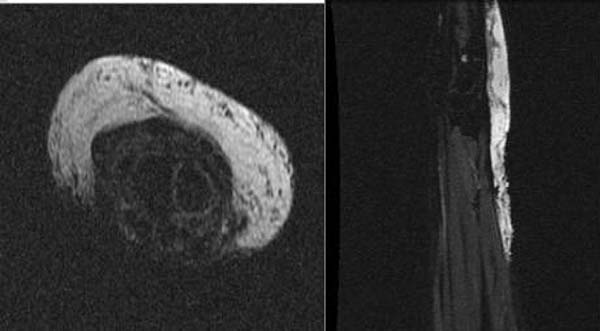 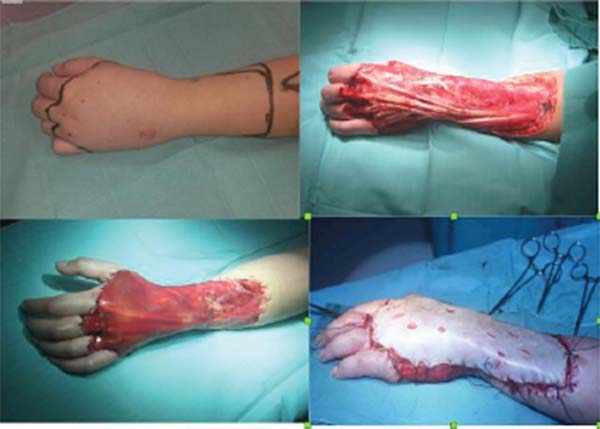 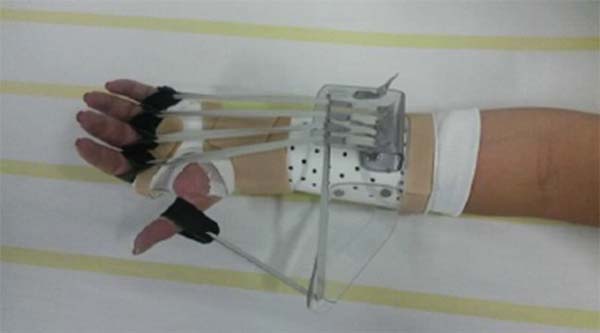 Myxofibrosarcoma is a rare tumor originating from connective tissue, previously known as myxoid variant of malignant fibrous histiocytoma. It occurs mainly in the elderly (60–80 years old), rarely before the second decade of life, and it affects extremities (75%), the trunk (12%), and the mediastinum (8%).1,2

Half of the cases originate in the dermis and in subcutaneous tissue, while the remaining arise in fascias and muscles. Histologically, it is characterized by a multinodular growth with a myxoid stroma of neoplastic fibroblast cells with mucin vacuoles. Low-grade lesions are hypocellular, consisting of few noncohesive, spindle-shaped or stellar cells with poorly defined cytoplasm and hyperchromatic nuclei and infrequent mitoses; high-grade lesions consist of spindle cell fascicles and pleomorphic cells with numerous mitoses, atypia, and areas of necrosis. Tumor cells are vimentin-positive in immunohistochemical studies.3

Magnetic resonance imaging (MRI) findings are nonspecific and heterogenic; a myxoid stroma may be evidenced. Differential diagnosis should consider other soft tissue tumors. Treatment includes wide monobloc excision. Local recurrence is observed in between 50 and 60% of the cases, regardless of the histologic grade.3-6 The aim of the present study was to describe the surgical reconstruction in a case of extensive myxofibrosarcoma in the upper limb.

A 23-year-old female patient reported that for 2 years she had pain, edema and swelling in her left hand, wrist and forearm. An MRI exam showed a possible hemangioma. The patient was treated with painkillers and steroid injections in another medical facility. On admission, she presented with pain, and the physical examination showed a swelling on the left hand, on the wrist, and on the forearm, with indistinct lesion borders.

A new MRI revealed an extensive, elongated, infiltrative lesion with indistinct margins affecting the subcutaneous tissue, with a circumferential appearance on the back, lateral, and medial faces of the left distal forearm and hand (► Fig. 1). A biopsy and an immunohistochemical study were performed and demonstrated a myxofibrosarcoma (► Fig. 2). The findings of a computed tomography (CT) scan of the chest were normal. The tumor, measuring 20 × 11 × 1.5 cm in the suprafascial plane (fascia, subcutaneous cellular tissue, and skin), was excised from the dorsum of the hand, from the wrist, and from the forearm under general anesthesia and brachial plexus block. Reconstruction was performed with a 10 × 10 cm dermal matrix (Integra) over the extensor tendons, activated charcoal bandages, and immobilization with a below-elbow splint (► Fig. 3). Patient-controlled continuous analgesia in the brachial plexus was established with ropivacaine 0.2% at 5 mL/hour, in 5 mL bolus and 30-minute block interval, and cefazolin, 200 mg in a single dose. The bandages were changed weekly under anesthesia. On the 21st day, margin expansion was performed on the back of the 3rd and 4th digits, and a 20 × 10 cm total skin graft was removed from the lower abdomen, with a dressing attached to the graft, and primary closure of the donor area (► Fig. 4). The dressing was changed in 1 week, and the complete integration of the skin graft was observed. The patient was referred to physical therapy, composed of oily substance, compressive mesh, flexion glove, sun protection, tendinous mobilization and stretching, and dynamic bracing with elastics and swirl (Fig. 5).

Download
Fig. 1. A, admission; B, 1st month after the surgery.
Fig. 2. Nuclear magnetic resonance (NMR) imaging (Ax GRE T2) showing a lesion deeply infiltrating the skin and the subcutaneous tissue along the extensor retinaculum, with a longitudinal extension of 19 × 8.5 × 1.7 cm (from the medial-distal third plane of the radius to the proximal digital phalanges), hypointense signal (T1) with intermixed areas of high signal indicating fat tissue and high signal (T2/STIR) with a slight contrast enhancement, leading to a suspicion of hemangioma.

Download
Fig. 2. Nuclear magnetic resonance (NMR) imaging (Ax GRE T2) showing a lesion deeply infiltrating the skin and the subcutaneous tissue along the extensor retinaculum, with a longitudinal extension of 19 × 8.5 × 1.7 cm (from the medial-distal third plane of the radius to the proximal digital phalanges), hypointense signal (T1) with intermixed areas of high signal indicating fat tissue and high signal (T2/STIR) with a slight contrast enhancement, leading to a suspicion of hemangioma.
Fig. 3. Immunohistochemical study results.

The histopathological examination revealed a diffuse, tumor-like thickening of the skin, subcutaneous cellular tissue and fascia at the distal and middle third of the surgical specimen, and gelatinous nodules infiltrating the entire thickness and touching the limits of the lesion. The microscopic analysis showed a low-grade myxofibrosarcoma (according to the Fédération Nationale des Centres de Lutte Contre le Cancer [FNCLCC, in the French acronym]) without vascular invasion, while the karyotype analysis revealed a normal clone and an abnormal one with alterations in chromosomes 1,3 and 10 and translocations in chromosomes 8 and 1943~45,XX,der(1;3)t(1;3)p31;p21,3)dic(8,19)q24,p13,3)der(10),t(1;10),p31;q25),rob(13;21)(q10;q10)15/46XX(5). There was no recurrence during the 1-year follow-up.

Depending on the degree of cellularity, nuclear pleomorphism, and mitotic activity, myxofibrosarcomas are classified into three histological grades: low, intermediate, and high grade.1,2 In the present case, the nonspecific physical and imaging features initially led to the misdiagnosis of a benign lesion, delaying treatment for > 2 years. The MRI scans showed characteristic images, such as the high signal in T2-weighted images seen in myxoid tumors, and a low signal in those with fibrosis. Although the nuclear magnetic resonance (NMR) findings did not confirm the diagnosis, they helped the surgical planning.

Reconstruction after tumor excision was performed in two stages. In the first stage, the dermal replacement material was kept for 3 weeks, whereas the second stage used a total skin graft. Reconstruction after the excision of extensive tumors use skin grafts, local flaps, and distant flaps; most recently, dermal matrix or negative pressure dressing systems are applied.7 In the 1980s, Yannas et al8,9 introduced the dermal substitute used up to this day in a variety of wounds. Moiemen et al10 performed studies evaluating the stages of healing in the dermal matrix, as well as its imbibition, cell migration, neovascularization, remodeling, and maturation. The dermal matrix was important to protect exposed tendons lacking their peritendium and to stimulate the formation of a graft-favoring granulation tissue when the histological result was obtained, and skin grafting was performed.

The late reconstruction allowed for the definitive histological outcome of the tumor and surgical margins, allowing the widening of the dubious margins on the back of the 3rd and 4th digits, which eventually were negative. One concern regarding myxofibrosarcomas is local recurrence due to the diffuse growth, to the infiltrative nature, and to the difficult definition of the surgical margin during surgery. The prognosis depends on the histological grade and size of the initial tumor. Low-grade tumors have an indolent biological behavior, with a local recurrence of between 50 and 60%, but no metastases. High-grade lesions have a risk of metastases to the lungs, bones, and lymph nodes of between 30 and 50%. The depth of the lesion does not influence the local recurrence rate, although deep neoplasms have a higher percentage of metastases and associated mortality, with a 5-year survival of between 60 and 70%.2 Although the follow-up without relapse was of 1 year, there are reports of recurrence rate in 25% of the cases in the first 5 years after excision.2,11

The presentation of the present case was important as an alert for the differential diagnosis of low-grade myxofibrosarcoma with other conditions in the upper limb of young patients, and the possibility of extensive excision with anatomical and functional reconstruction after histopathological examination with dermal matrix and skin grafting despite the extent and the infiltrative nature of the tumor.