Vascular complications in the surgical treatment of hip fractures are rare. Depending on the arterial injury, severe intraoperative bleeding or a subacute hematoma formation with arterial pseudoaneurysm development can occur. In the literature, the more frequently described complications are large local hematomas after osteosynthesis with sliding hip screws. This report shows a case of delayed arterial injury after proximal femur osteosynthesis. 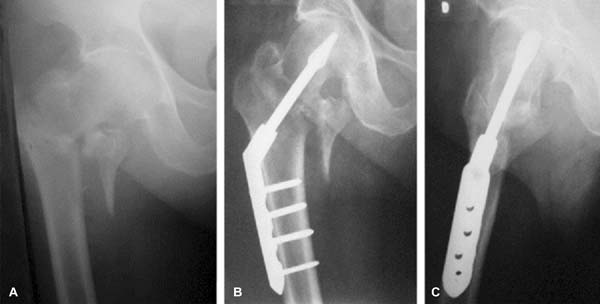 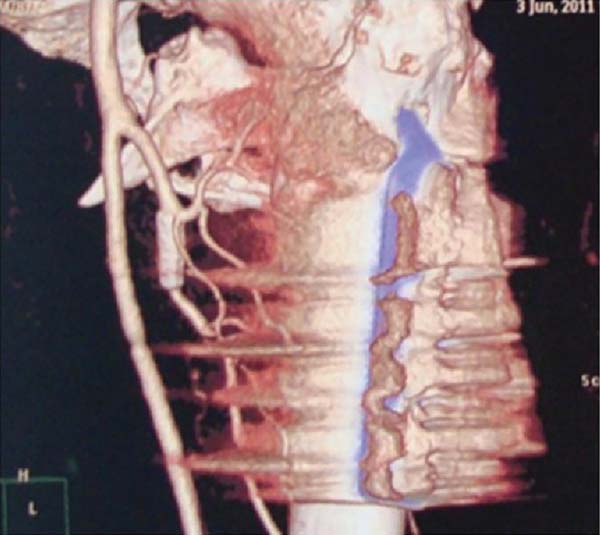 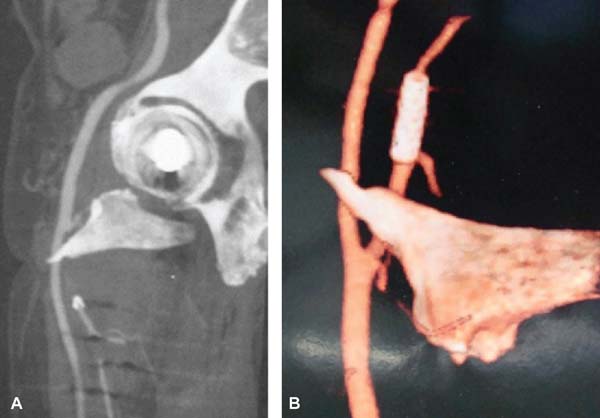 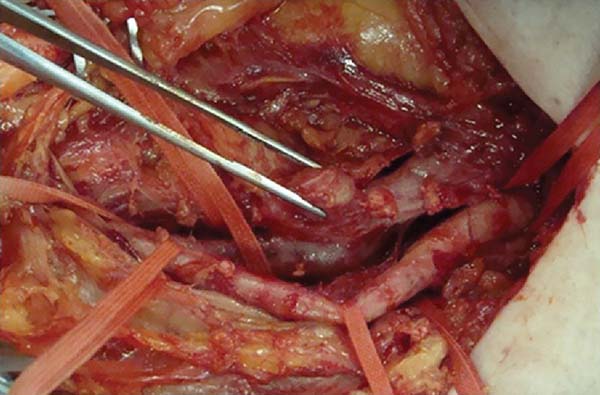 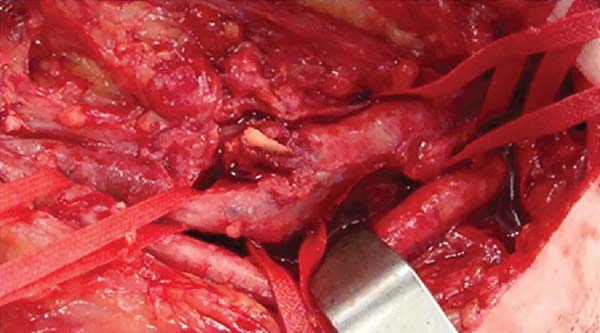 The rate of vascular complications in the surgical treatment of hip fractures is as low as 0.2%.1 Vascular compromise in this anatomical region can be caused by bone fragments formed due to iatrogenic reasons, intramedullary nail locking screws, poor retractor positioning, drilling perforation or bone fragments movement during reduction.2 Depending on the vessel wall defect, the lesion may cause a massive intraoperative bleeding or subacute hematoma formation with arterial pseudoaneurysm development. Several authors have observed high rates of occult vascular compromise after the use of proximal femoral plates.3 The literature reports the formation of large local hematomas following osteosynthesis with a sliding hip screw as the most frequent complication.1-3

This paper reports a case of late arterial damage after proximal femoral osteosynthesis.

A caucasian, male, 87-year-old patient was brought to the emergency room within 3 hours after falling, presenting pain, functional disability and external rotation of the left lower limb. The radiographic examination showed a proximal fracture of the left femur, of the transtrochanteric type and classification AO classification 31-A2. The patient reported type II diabetes mellitus, diabetic polyneuritis, osteopenia, and systemic arterial hypertension as comorbidities.

The patient was successfully treated 24 hours after the fall with a nail type osteosynthesis and DHHS Synthes sliding plate (DePuy-Synthes companies of Johnson&Johnson) (► Fig. 1). Twenty-three days after the surgery, the patient presented sudden pain, and an important left lower limb functional disability, irradiating to the ipsilateral knee and increasing the diameter of the thigh (55 cm to 58 cm). Physical examination showed arterial hypotension (blood pressure 90 × 60 mm Hg), heart rate of 100 beats per minute, cold sweating and pallor; the packed cell volume was 16%, and the hemoglobin level was 58%.

Fig. 1. A, Radiography of a right transtrochanteric fracture; B and C, fracture treated with a hip sliding screw (dynamic helical hip system [DHHS]).

Ultrasound examination of the left hip revealed a large soft-tissue infiltration with debris at the thigh, leg and lower abdominal quadrant.

An arteriography revealed an aneurysm lesion communicating with the left femoral leak.

The vascular surgeon decided to place two stents in the deep femoral artery; the patient presented a significant improvement in the clinical picture and was discharged from the hospital (► Fig. 2).

Six months after the last surgical intervention, the patient complained of burning sensation and acute pulsatile pain in the medial thigh region and on the left knee, which worsened with dorsal recumbency and improved upon standing up. A computed tomography angiography identified a small trochanter bone spike piercing the deep femoral artery (► Fig. 3A and B). The patient underwent a new surgical procedure to remove the minor trochanter fragment injuring the deep femoral artery, which was sutured (► Figs. 4 and 5). Two days after the surgical intervention, the patient was discharged without further complications.

Fig. 3. A and B, Computed tomography angiography showing a minor trochanter piercing the deep femoral artery.

The incidence of vascular compromise after hip fracture stabilization is rare. However, if present, these complications can cause limb dysfunction over time or even be life-threatening.

Barquet et al4 showed that most vascular lesions are extrapelvic (91.20%) instead of intrapelvic (8.24%). In the extrapelvic group, the prevalence of lesions in the deep femoral artery and its branches was as high as 78.31%. Few cases occurred in superficial femoral vessels (10.84%), and even fewer involved other thigh arteries. Our patient presented a lesion in the deep femoral artery, the most commonly involved artery.

Vascular lesion types include compression with blood flow restriction, intimal flap injury with decreased distal flow, intimal or atherosclerotic plaque rupture resulting in arterial thrombosis or thromboembolism, limb ischemia due to surgical ligature, acute hemorrhage by laceration or transection and perforation, and progressive arterial erosion, which produces a pseudoaneurysm or arteriovenous fistula.1,5,6 Arterial erosion is highly prevalent and results in the formation of a pseudoaneurysm. Our patient suffered two stages of arterial injury. The 1st one was compression with blood flow restriction, developing hip pain for a period of 1 year with thigh edema higher than 3 cm, which was treated by arterial stenting. Next, at a second stage, the patient presented acute pain in the inguinal region, with perforation, progressive arterial erosion, and the development of a pseudoaneurysm.

Vascular lesions may be caused by fracture fragments, predominantly the diverted minor trochanter.7 Barquet et al4 demonstrated seven non-iatrogenic lesions produced by minor trochanter or other bone fragments, both in patients submitted to the conservative treatment or after surgical fixation. Some authors recommend the perioperative monitoring of the minor trochanter with medial or proximal deviation, which may require fragment reduction, fixation or removal.8-10 Our patient presented a late femoral artery lesion with pseudoaneurysm formation due to a deviated minor trochanter 1 year after the fracture.

Vascular lesions after proximal femoral fractures mainly affect the deep femoral artery. Pseudoaneurysms are more frequent and reveal the late lesion diagnosis. The most frequent non-iatrogenic lesion is the one caused by a minor trochanteric fragment deviation.