Florid reactive periostitis is a benign and rare lesion that is a recurrent diagnostic problem. Its etiopathogenesis remains unknown. Florid reactive periostitis consists of a fibrotic, cartilage-producing tumor accompanied by an aggressive inflammatory periosteal and soft tissue reaction. It typically occurs in adolescents and young adults, mostly female; it often affects hand and foot bones, and it may occur in long bones. Its diagnosis remains a major challenge due to the vast possibility of differential diagnoses. Therefore, careful clinical, radiological, and pathological evaluation is required to establish a proper diagnosis. We report the case of a patient with florid reactive periostitis in the proximal phalanx of the right index finger, who underwent surgical excision with a wide margin, from the second ray to the proximal third of the second metacarpal bone, and evolved without complications, with satisfactory range of motion and strength. 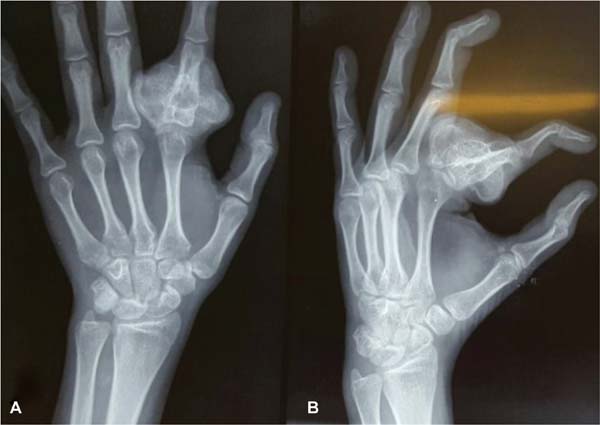 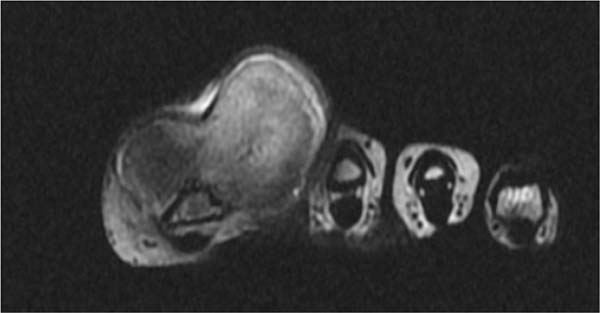 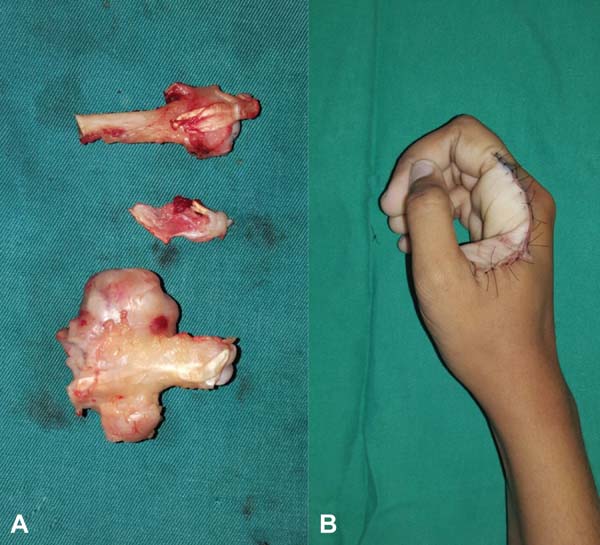 Florid reactive periostitis is a benign and rare lesion, part of a family of reactive bone and soft tissue lesions that constitute a recurring diagnostic problem. One of the earliest descriptions of the lesion dates back to the 1930s, when Tracy B. Mallory1 (1933) reported 6 cases, including 4 with tumor lesions that were very similar, if not identical, to reactive periostitis. About 30 years later, Hutter et al2 proposed the term “parosteal fasciitis” because of the histological resemblance with soft parts nodular fasciitis; moreover, the term “parosteal” anatomically located the lesion.

Florid reactive periostitis is more frequent in the second and third decade of life, although the affected age group reported in the literature ranged from 5 to 70 years-old.3-5 According to Fechner e Mills,6 the male to female ratio is 1 to 1.5. The lesion is commonly found in the phalanges of the hand, mainly in the proximal phalanx.

This disease is characterized by an exuberant osteoblast production in a fibrous proliferative stroma originating at the level of the finger periosteum. The radiographic study shows soft tissues swelling and periosteal bone neoformation, which may appear as lamellar or mature bone. The cortex is usually intact.

This case study discusses the clinical history, radiologic and histologic findings, and treatment of a patient with florid reactive periostitis in the proximal phalanx of right index finger.

A female, 17-year-old patient presented with a history of tumor lesion in the right index finger for the last 4 years. Three years earlier, she had sought medical attention because of lesion growth. A biopsy was performed in May 2014. The histological analysis revealed mature bone trabeculae involving typical adipose cells disposed in sheets, in addition to mild inflammatory lymphocytic infiltrate. In September 2014, the patient underwent a computed tomography scan, which revealed a massive bone exostosis in the second ray of the proximal phalanx, measuring 4.2 × 3.3 × 2.2 cm, with lobulated and well defined borders and a cortical sharpening area, but no rupture or extension to adjacent soft parts (► Fig. 1).

Fig. 1. Coronal computed tomography scan of the right hand showing an inflated lesion with tapering, cortical sclerosis and periosteal reaction in the proximal phalanx of the index finger (A); Preoperative clinical aspect of the hand, with limited index finger function (B).

Download
Fig. 1. Coronal computed tomography scan of the right hand showing an inflated lesion with tapering, cortical sclerosis and periosteal reaction in the proximal phalanx of the index finger (A); Preoperative clinical aspect of the hand, with limited index finger function (B).

In January 2015, a new histopathological study was carried out, revealing the presence of cartilaginous tissue containing large nuclei chondrocytes and a calcified matrix, associated with bone trabeculae permeated by adipose tissue with no atypia, suggestive of Nora's florid periostitis.

The patient came to the outpatient clinic in April 2015 reporting a flexion deficit at the affected finger. Physical examination showed a solid tumor growth located in the proximal phalange of the index finger, measuring 3.0 × 2.5 cm. On the occasion, a radiographic study of the right hand revealed a large tumoral mass affecting all proximal phalanges of the index finger (► Fig. 2).

Download
Fig. 2. An anteroposterior radiography shows edema and an ossified mass of soft tissue in the proximal phalanx of the index finger (A), whereas an oblique radiography shows evidence of intraarticular tumor extension (B).

A third incisional biopsy demonstrated bone trabeculae permeated by adipose tissue, associated with an area of fusocellular proliferation with activated aspect within a collagen matrix deposition, with low mitotic activity and absence of necrosis, consistent with florid periostitis. A surgical procedure was scheduled, but not performed because the patient was pregnant; she returned after 11 months.

Upon return, at the physical examination, the lesion had increased in size, and the following macroscopic features were noted: irregular, circumferential edges, and 6.0 × 4.5 cm in size. A magnetic resonance imaging (MRI) of the right hand revealed an expansive, vegetative bone lesion, measuring 4.1 × 1.9 × 3.2 cm, covered by a thin cartilage sheet and pedunculated to the metaphyseal area of the index finger metacarpus (► Fig. 3).

Biopsy and imaging results led to the surgical excision with a wide margin, from the second ray up to proximal third of the second metacarpal bone (► Fig. 4).

Fig. 4. Surgical specimens photographed after lesion removal (A) and immediate postsurgical appearance (B).

The patient evolved with no aesthetic or pain complaints and with satisfactory range of motion and strength.

Florid reactive periostitis is a benign condition that can mimic osteomyelitis or a malignant bone neoplasm due to its clinical and radiological features. Although it is a benign condition, the clinical presentation is usually alarming and requires exclusion of other pathological conditions, such as osteomyelitis, osteochondroma, giant tendon sheath cell tumors, chondrosarcoma and parosteal osteosarcoma.

The final diagnosis is histological, evidencing an osteoid formation and a bone and cartilaginous mass within a fibroproliferative stroma fundus. The fibrous component consists of a large nuclei axis, but no atypical mitoses. Giant cells and inflammatory cells in varying numbers can be noted.3-5

Florid reactive periostitis can be easily confused with other serious conditions. It is difficult to differentiate florid periostitis from bizarre parosteal osteochondromatous proliferation (BPOP). Also known as Nora's lesion, BPOP is a rare, but aggressive condition.

Turret's exostosis or acquired osteochondroma is a rare dome-shaped bone disease affecting the dorsum of the proximal and middle phalanges of the fingers.2

Some authors agree that local and total tumor resection is sufficient for complete treatment.9 However, other authors report relapses3,4 that may lead to an additional resection.9 In a literature review, Patel e Desai10 recommended the use of the Enneking surgical staging system11 for benign tumors in florid reactive periostitis cases to consider differences in tumor recurrence. They concluded that local resection would be appropriate for less aggressive, grade I tumors, but not for grade II and III tumors, which require ray amputation for relapse prevention.10 Since our patient presented a stage III lesion, as per the Enneking classification,11 a surgical excision with wide margin was performed.

The diagnosis of florid reactive periostitis remains a challenge due to the wide range of differential diagnoses, especially malignant conditions. Therefore, careful clinical, radiological and pathological evaluation are required to establish the appropriate diagnosis.