Joint preservation surgery is accepted in cases of secondary osteonecrosis of the knee without joint collapse. However, there is no consensus on the best treatment: debridement and drilling, or use of auto- or allograft. The author describes a clinical case with 15 years of evolution where allogeneic osteochondral graft was used in the treatment of osteonecrosis of the lateral femoral condyle in a young woman with systemic lupus. In spite of having other options and of the results reported in the literature, the functional evaluation 15 years later presented excellent results, with total autonomy of the patient for daily life and work tasks, indicating that the option for osteochondral allograft may be a good solution. 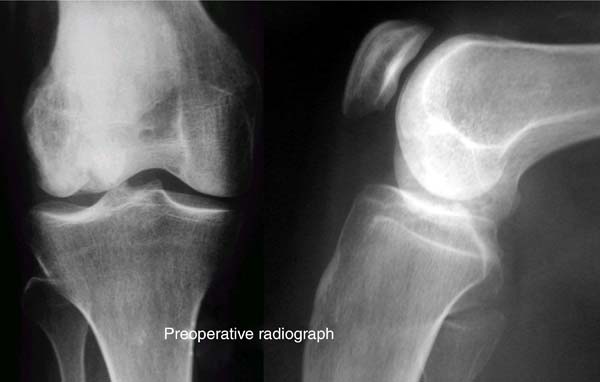 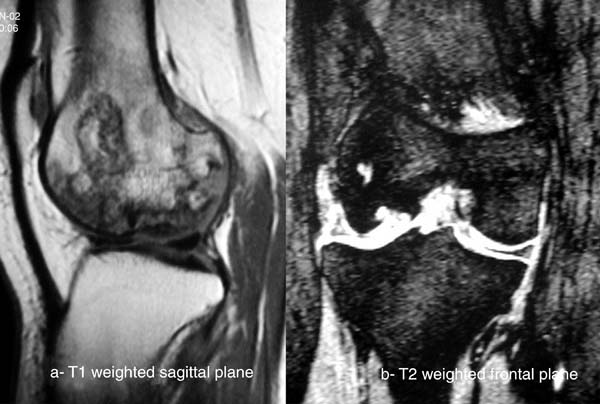 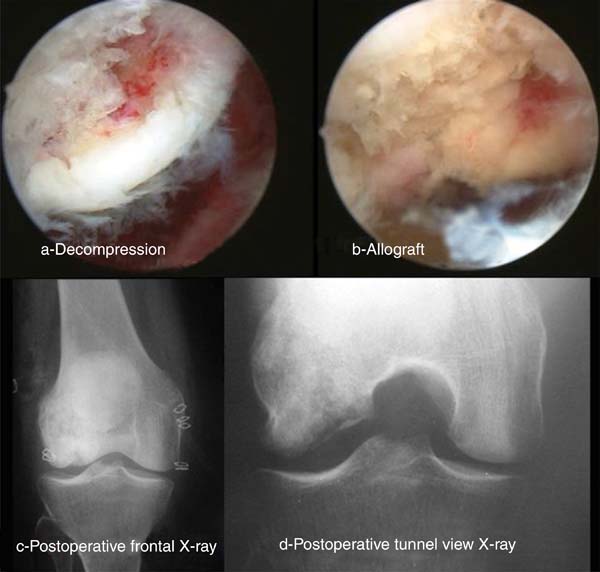 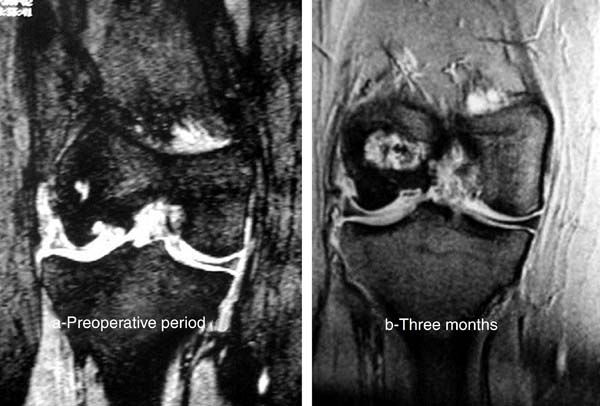 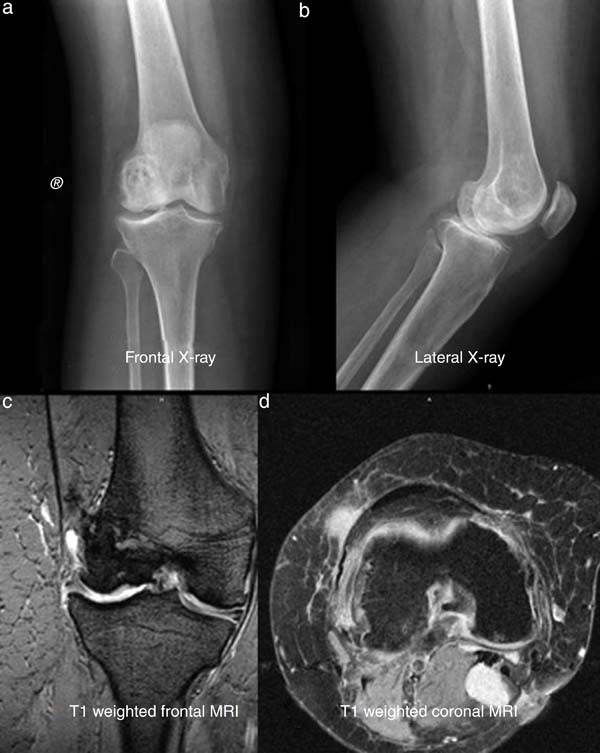 Osteonecrosis of the knee may be caused by two entities, spontaneous knee necrosisa or secondary necrosis.1 In the latter, although the true ethology is unknown, some associated risk factors have been described, such as the use of corticosteroids, alcoholism, sickle cell anemia, systemic lupus erythematosus (SLE), and Gaucher's disease.2

There are several treatment options, including core decompression and allograft, which have been reported in the literature as having poor results.3b

The present study reports the case of an SLE patient in corticosteroid therapy who developed osteonecrosis and was treated with osteochondral allograft 15 years ago.

A female patient, white, aged 30 years in 2002, a housemaid, non-smoker, had SLE and had been treated with corticosteroids (methylprednisolone) for 4 years. She was seen at the outpatient clinic with mixed-type right knee pain and night exacerbation.

On physical examination, she presented a slight limp and alterations of skin pigmentation around the knee.

Knee radiograph (Fig. 1) was compatible with osteonecrosis of the lateral femoral condyle, which was later confirmed by magnetic resonance imaging (MRI; Fig. 2).

Considering the age of the patient, the extent of necrosis, and the risk of bone collapse, the proposed treatment was decompression and allogenic osteochondral graft application, which the patient accepted. The procedure was performed in March 2002 under arthroscopic control (Fig. 3).

Fig. 3. Surgery and radiograph in the immediate postoperative period.

Download
Fig. 3. Surgery and radiograph in the immediate postoperative period.

With the patient in dorsal decubitus and knee flexion, an exploratory knee arthroscopy was performed and the softened area of the femoral condyle was identified. Guided by fluoroscopy, a comparison was made between the site identified by arthroscopy and the osteonecrosis area identified on the radiograph. Subsequently, a 2.5-mm drill bit was used outside inwards, utilizing a ligament reconstruction guidewire. Then, decompression was performed with progressive diameter drill bits (outside-in) to a diameter of 6 mm, up to where the bone tunnel walls were bleeding. A second team thawed a femoral condyle allograft and prepared a bone cylinder with the same diameter and length as the tunnel made in the patient. When introducing the allograft into the tunnel, under arthroscopic control, care was taken not to go beyond the cartilage.

In the postoperative protocol, the patient performed active knee mobilization without weight-bearing for 8 weeks, after which weight-bearing was progressively authorized.

Fig. 4. Magnetic resonance imaging in the preoperative period and 3 months after surgery.

Download
Fig. 4. Magnetic resonance imaging in the preoperative period and 3 months after surgery.

Since the surgery, the patient has had no pain complaints and is able to perform her professional and daily living activities normally. SLE medication (methylprednisolone - 20 mg per day) was maintained and she continued to be followed-up for that condition. According to her clinical record, 1 year after the surgery the patient's SLE medication was changed to deflazacort - 6 mg daily. No other systemic or joint complications were observed.

In March 2017, 15 years later, the attending physician requested an orthopedic evaluation to assess her work skills. A clinical and imaging assessment was performed.

Clinically, the patient has no pain complaints, no joint effusion, and presents normal gait and knee mobility.

The radiographs and MRI (Fig. 5) show graft integration and the presence of lateral femorotibial compartment arthrosis that does not impede the patient's professional activities.

The treatment of secondary osteonecrosis of the knee is essentially surgical and in the long term not devoid of complications. There is no consensus on the best treatment; however, in cases without joint collapse, the option for joint preservation surgery appears to be consensual, although prospective studies are lacking.

To prevent bone collapse, arthroscopic core decompression4 is the most used method when there is no subchondral collapse. However, it presents a failure rate of about 10%,4 and is mainly used to stimulate revascularization of the affected area. Furthermore, a second surgery may be necessary to reconstruct the affected area with auto- or allograft.

The use of autograft was introduced by Matsusue et al.5 Hangody et al.6 reported a 90% rate of good results in the medium-term, confirmed by studies by Tanaka et al.7; this procedure may postpone total knee arthroplasty for many years (two to eight).7

In turn, the use of allograft has not been stimulated given the results and complications described by Bayne et al.,3 despite not having been confirmed by Flynn et al.,8 who observed a 70% rate of good results at 12 years.

The other solution would be arthroplasty, whether unicompartmental or total, as it reaches a condyle. Recently, Parratte et al.9 reported good results with unicompartmental arthroplasty in cases of single condyle involvement, but those authors considered age (30 years) and extensive involvement of the lateral condyle as a contraindication for this solution.

In the present case, the challenge faced was the decision between a joint preservation surgery or an arthroplasty. It was considered that, even in the case of failure and a rapid degeneration of the articular interline, the placement of a bone graft would be important for future arthroplasty surgery.

The orthopedic follow-up of the present patient lasted 1 year, after which period she was followed-up by a rheumatologist. During those years, she did not present systemic or articular complications, and the SLE was managed with low doses of corticosteroids. The degenerative alterations observed at that time must be analyzed in light of the initial lesion, and they do not show a very marked or accelerated evolution. These alterations are tolerated by the patient because they are in valgus. Despite the radiographic alterations, this case is evolving well from a clinical standpoint and can be considered a success as the treatment gave the patient 15 years of functional use. The experience gained from this case led the present author to operate on other cases, with similar success.

While waiting for more consistent results from other biological alternatives,10 the use of osteochondral allograft in secondary osteonecrosis should be considered a valid option.