OBJECTIVE: To evaluate the microfracture intervention with tibial valgus osteotomy associated in the treatment of varus gonarthrosis.
METHODS: From November 2005 to May 2013, 129 patients with medial gonarthrosis, varus deformity (8°-12°), and range of movement greater than 90° were evaluated. Patients with advanced gonarthrosis (Alhbäck 3, 4, and 5), Outerbridge lesion inferior to IV, previous knee surgery, body mass index greater than 35 kg/m2, and/or cruciate ligament injuries were not included. All patients were treated with videoarthroscopy followed by tibial valgus osteotomy. In the group osteotomy associated with microfracture (n = 56, mean age = 39.3), tibial valgus osteotomy and microfracture techniques to address chondral defects were used. In the isolated osteotomy group (n = 73, mean age = 41.4), only this procedure was performed. Post-surgical follow-up was 24 months, with four evaluations in the first 6 months, proceeding to biannual twice-a-year evaluation in the subsequent period. The Lysholm scale was used for functional monitoring.
RESULTS: There was a significant improvement in the pain, limping, and squatting domains of the Lysholm scale but only in the isolated osteotomy group. A greater variance of results was observed in the osteotomy group associated to microfracture, in addition to an increased risk of functional deterioration (OR = 8.64).
CONCLUSION: The association of microfractures and tibial valgus osteotomy was correlated to lower functional outcomes than tibial valgus osteotomy alone, and may be related to the risk of worsening in the first two postoperative years. 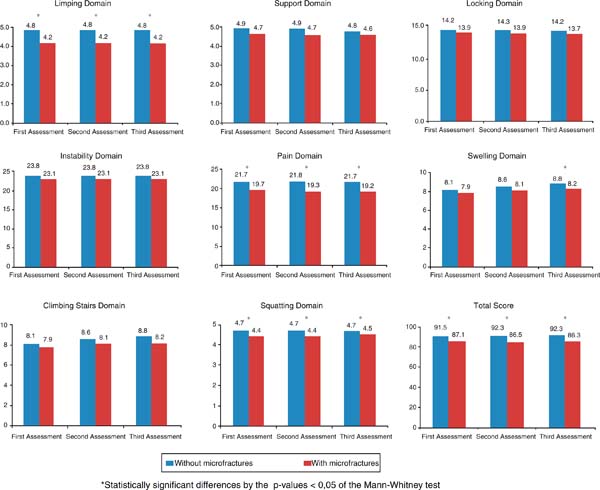 Osteoarthrosis is among the main diseases responsible for reducing the quality of life in the elderly, and the knee is the most affected joint.1,2 Risk factors for the development of this pathology include heredity, obesity, fractures, and angular deviations.3 The disease commonly begins in the medial compartment and is closely related to limb alignment.4 The presence of varus of the lower limb, for example, is not only an isolated risk factor for the onset of gonarthrosis but also accelerates disease progression among those patients who already present joint degeneration and have a limb misalignment.5

Changes in the medial compartment are observed early in young adults who will develop the disease. In these patients, the presence of varus associated with focal joint defects, joint instability, and/or medial meniscectomy may accelerate joint deterioration in an active phase of life, when the joint is still quite biomechanically required.4,5

Despite the advances in unicompartmental arthroplasty techniques, studies have shown that young adults with an active lifestyle who present medial gonarthrosis obtain greater long-term benefits from joint-sparing procedures.6,7 It has also been well-established that good joint alignment is paramount for the success of joint preservation techniques, such as osteochondral transplantation, autologous chondrocyte transplantation, abrasion arthroplasty, and microfractures.8,9 Thus, in patients with varus in whom it is desirable to postpone the arthroplasty, realignment is an important step in the surgical treatment.

Many studies have evaluated the results of tibial valgus osteotomy (TVO) for genu varum with early signs of medial compartment arthrosis, and have reported that the good results obtained postpone the need for arthroplasty.9-13 However, there are few reports in the literature that assess the functional outcome of the TVO technique in the short and medium-terms.5

This study was aimed at evaluating the clinical and functional benefits of the intervention of the microfracture technique in patients who underwent TVO for the treatment of angular deviations in varus and gonarthrosis of the medial compartment.

This is a retrospective cohort study in which patients with genu varum and medial gonarthrosis underwent knee video arthroscopy, followed by TVO with or without microfracture. The patients were operated between November 2005 and May 2013. The study was approved by the Research Ethics Committee of the Center for Biological Sciences and Health of this institution under CAAE No. 51547415.5.0000.5258.

A total of 129 patients between 18 and 70 years of age were included in the study, and the selection criteria listed in Table 1 were observed. The information contained in the medical charts and the images were obtained from the institution's image bank.

The radiographic classification of Ahlbäck and Rydberg,14 modified by Keyes et al.,15 was used for gonarthrosis classification. Panoramic orthostatic radiographs were used to assess the lower limb axis and to quantify the varus deviation.

All study participants underwent TVO, with medial vertical access in the proximal tibia between the anterior tibial tuberosity and its posterior medial border, followed by periosteum en bloc dissection until the posterior tibial cortex could be visualized. Guidewires (2.5 mm Steinmann wires) are positioned approximately 4 cm from the articular surface, towards the superior portion of the proximal fibular head, with radioscopic aid. The osteotomy is then performed, preserving the lateral cortex because its integrity functions as a fulcrum for the osteotomy. The opening is previously calculated using the Dugdale et al.19 method, and a second preoperative control is made using a tuning fork that keeps the osteotomy open and with the aid of radioscopy and a metal wire positioned from the centre of the femoral head to the centre of the ankle through the point of Noyes et al.,20 located in the lateral compartment of the knee (point corresponding to 62.5% assessed from the medial proximal tibia). A hydroxyapatite graft is placed, followed by the Tomofix plate (AO Synthes®) with eight locking screws. A Hemovac® drain was used in all patients, who were discharged 24 h after surgery with partial weight-bearing and a long knee immobilizer for analgesia during the first week; after that, knee range of motion exercises were indicated. Patients who underwent only the TVO procedure were included in the isolated TVO group in this study.

In the postoperative period, patients were regularly followed-up at outpatient appointments for 2 years. In the first 6 months after the procedure, four appointments were carried out, and half-yearly evaluations were performed thereafter. The Lysholm functional score21 was used to follow-up the clinical and functional evolution at four moments: at the time of admission to the surgical treatment, and at 6, 12, and 18 months postoperatively. Radiographs were systematically used to confirm bone consolidation; this was the criterion for authorizing weight-bearing on the operated knee. All the patients selected evolved with osteotomy consolidation before the first clinical and functional evaluation in the postoperative period, with a correction of 5 degrees of valgus of the mechanical axis.

The Lysholm score results and the statistics used in the total score and its domains are listed in Table 2. The coefficients of variation demonstrated that the variability of scores was relatively higher in the TVO + microfracture group. In all evaluations, in both groups, the variables did not follow a normal distribution, as all normality tests resulted in p-values lower than 0.001.

The difference between the mean values of total Lysholm scores and its domains, preoperatively, between the TVO + microfracture and isolated TVO groups, was not statistically significant (p > 0.05 by Mann-Whitney's test). A significant improvement in the scores was observed in both groups after surgery (Table 2) and during the postoperative period (p < 0.05 by Mann-Whitney's test), with higher values in the isolated TVO group. Comparing the studied groups in the postoperative period, it was observed that the improvement obtained was significant in the total values, but only for the limping, pain, and squatting domains (Table 3 and Fig. 1).

Download
Fig. 1. Comparison between groups in the postoperative period.

Analyzing the frequency distribution of 129 patients between the 12th and 18th months, 95.3% (123 patients) remained in the same classification, only 0.8% (one patient) improved from good to excellent, and 2.3% (three patients) worsened from good to regular. These changes were not statistically significant (p-value: 0.112; McNemar test). The most significant changes in patient status were observed between the 6th and 18th months, especially in the isolated TVO group.

The literature describes different strategies for the treatment of chondral defects.2 These include the creation of microfractures in the defective bed, which has been frequently used in the management of symptomatic chondral defects of the knee joint.2,4,5,7,8,18 This technique induces the formation of fibrocartilage through mesenchymal cells migrated from the subchondral space.18 It is a simple and reproducible technique, with low morbidity.

The prevalence of chondral lesions of the medial compartment in patients with genu varum is high11,12; they are related to the pathophysiological process of medial gonarthrosis. TVO is a proven technique for the treatment of genu varum in patients who do not yet meet criteria for TKA.9-11,13,19,20 Recent studies have associated the TVO and microfracture techniques aiming to delay the onset of medial gonarthrosis and improve short and medium-term joint function.5

In this case series, only patients with symptomatic genu varum with medial chondral lesion were selected. All patients underwent TVO aiming to reduce the overload on the medial compartment. Patients from the TVO + microfracture group underwent microfractures in the areas of chondral defects; better results were expected with the association of the two techniques, but this outcome was not observed.

There are few reports in the literature that have evaluated the functional outcomes of the association between TVO and microfracture.22-25 Akizuki et al.23 concluded that fibrocartilage formation occurs within the first postoperative year and has limited functional benefits; the clinical short and medium-term outcome is associated with an improvement in the dynamic factors related to TVO. Much has been discussed about the correlation between the formation of fibrocartilage after the creation of microfractures and the functional improvement observed postoperatively,22,23,26,27 but to date, it has not been possible to associate the clinical and functional benefits with the correction of a chondral defect (Jung et al.28). The present study did not assess fibrocartilage formation, but it was clear that the association of microfracture with TVO had a deleterious effect, increasing the chances of functional worsening, especially for the domains of limping, pain, and squatting.

The authors believe that the functional improvement observed in both groups was due to limb realignment, which reduces the impact on the subchondral bone, reducing the intravenous pressure, which in turn reduces the microfracture of the subchondral bone. The present results are consistent with those of other authors who assessed the role of TVO in the progression of gonarthrosis.10,19,20,26

In the present study, no difference was observed between the groups in relation to age, but the variance within each group was significant and may have interfered in this outcome; nonetheless, both groups presented better results when compared with the preoperative period, confirming the importance of limb realignment in clinical short and medium-term improvement.

The Lysholm score is a subjective evaluation; ideally, it should be associated with other methods to increase the predictive value. The Lysholm score was used because it was the only one validated for the Brazilian population at the beginning of this research. The present authors agree with Albuquerque et al.29 that this evaluation system has a low negative predictive value and underestimates the score of patients with normal knees.

The retrospective design, the small number of patients, and the lack of radiographic and arthroscopic evaluation of the chondral defects in the postoperative period are limitations of the present study, especially in defining the benefits of TVO + microfracture.

The TVO + microfracture group presented a lower functional benefit than the isolated TVO group and had a greater chance of getting worse in relation to preoperative conditions.

10
Coventry MB. Proximal tibial varus osteotomy for osteoarthritis of the lateral compartment of the knee. J Bone Joint Surg Am. 1987;69(1):32-8.

11
Keene JS, Dyreby JR. High tibial osteotomy in the treatment of osteoarthritis of the knee. The role of preoperative arthroscopy. J Bone Joint Surg Am. 1983;65(1):36-42.